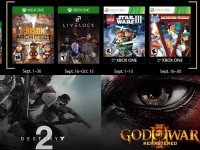 A new month is almost on us here with September and that means new video games that we are going to get for free. Well, video games that you will get for free if you are part of the PlayStation Plus or Xbox Gold services. If you are then you may be in for a treat as the list of titles going live starting next month is here and we have it for you. Again, we get to expand out titles on the Xbox One and PS4 without needing to make any extra spends at our local stores.

While all of us are the clear winners here as we have a whole lot of new video games to play for free here, it does look like the PlayStation titles are taking the lead over the Xbox ones. Maybe this is because there are a lot of huge titles dropping in the next week or two and Microsoft knows this, or they are just holding off for some other greats in the following month. Or they did not want to compete with Destiny 2 and God Of War III for attention this month. No matter how you cut it, you can see where I will be playing my video games for the next month as we hope for some great horror titles in October.

Here is the list of games we will all get for our PlayStation systems starting on September 4th of 2018.

Here is the list of games we will all get for our Xbox systems starting on September 1st of 2018.