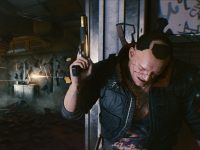 So much hype has been built around Cyberpunk 2077 and most of the public has not seen much more than a short trailer and a few screenshots. I am not saying that the hype is unfounded as what I was able to spy out at E3 was truly amazing and it made me ready for what CD Projekt RED was building here for us all. Maybe you read my breakdown or maybe you did not. It was your loss if you missed out as the excitement for Cyberpunk 2077 has been building even though it was all clouded in mystery. If you have been following along here, though, you know what is coming. That is right. Until Now…

After showing Cyberpunk 2077 off again to select people out at Gamescom recently, it felt like everyone else was going to miss out. I am guessing that is why we have the demo footage that was heavily guarded before dropping on us after the developer's Twitch channel started streaming something weird. Now we all have access to see the 48-minute demo that captivated so many and won Cyberpunk 2077 so many awards over multiple gaming shows. Even with it being a work in progress here and things may be changing along the way, it still is a great showing of what the team is aiming for. That and how things could evolve and change once they are focusing down toward a release date.

Watch 48 minutes of official 2018 gameplay from Cyberpunk 2077 and get a glimpse into the world of perils and possibilities that is Night City — the most vibrant and dangerous metropolis of the future.

As you may have noticed here, this demo took the role of a female version of the main character V. The more recent showing of the demo out at Gamescom for Cyberpunk 2077 took on a similar demo using a male version of the character. As it has been reported, most of the same footage from above plays out the same just with a male character. That also includes the NPC leaving the bedroom after the first mission. As CD Projekt RED has said before, there will be many options to play V as you wish and all of the same options are there no matter the gender you go with. That and they are not limiting their relationship system down to fit the societal forced norms.

There is a reason to say all of that here, as we have a few screenshots of a male version of V here for Cyberpunk 2077 to look at and see how he will be mixed into the game. This way you can sit back and know that no matter what you want to go with when the game drops, you will most likely not be left out. I would love to play as a full-conversion cyborg with no discernable gender myself, but there is only so much we can hope for in our video games right now. The design work, coding, and art for all the options would be a nightmare and we would never get to actually play Cyberpunk 2077.

How are your hype meters doing for Cyberpunk 2077 now that you have had a taste of what could be part of the game? Did you expect there to be so much going on in this relatively small slice of the game or did it fit your expectations? How do you feel about the options we will have in the full game and are you already plotting out your path for when it finally drops? Let us and the world out there know what you are thinking down in the comments and then feel free to discuss. For more on Cyberpunk 2077, keep your eyes locked in to the site. We will be bringing you everything that we can as fast as we get it.