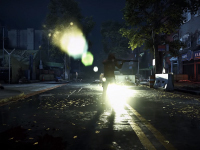 We will soon be treated with more for Overkill’s The Walking Dead as it looks like the developer is heading out to Gamescom here in the coming weeks and unsurprisingly bringing its gameplay with it. Not too shocking given that Overkill just showed the first bit off at E3 here and it was met with a whole lot of positive responses in general. Hells, we even loved the hells out of this take on The Walking Dead and are glad to see more gamers are going to get to check it out before launch. Not only that, but check out a little more of what they have been working on. That is what we have here to talk about right now on top of that.

If you are lucky enough to be out at Gamescom and swing by the booth for Overkill’s The Walking Dead, you will get to check out the game and a new, darker area yet to be shown off to the world. At least in full as we have a small taste of it just below near the end of the video we have to share. When I say dark, though, I am not talking about in terms of The Walking Dead universe. I am talking about in terms of nighttime and environment. At least as the very small clip makes it look. I will take it as all of what I have experienced so far has been during the day and I know we will all like the danger and fear of heading out at night. Not only that, but it looks just as amazing as we have seen so far. Have a look.

It’s time to find out what’s next for Overkill’s The Walking Dead! Overkill’s Almir shares the latest and invites you to join us at Gamescom next week! If you are at Gamescom, make sure you drop by our booth at Hall 9 in the ESL Arena. If you can’t attend the event — don’t worry! Just follow us on our channels to get all the latest.

What do you think about the very little and new footage we have for Overkill’s The Walking Dead here? Are you glad to see the nighttime version of the game in action slightly and did it look about how you figured? Will you be out at Gamescom and will you be hoping into the lines to give it all a good play? Let us and the world know down in the comments and then feel free to discuss. For more on this and anything else The Walking Dead, just keep checking in here. We will have it all for you and you will be glad you stuck close to the site.