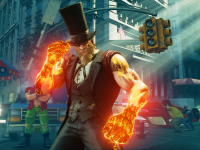 It is time to wrap up the third season of character DLC for Street Fighter V: Arcade Edition as we have not one but two fighters finally joining the ranks in the game. We knew both of them were coming as Capcom showed them off not too long ago, but unlike we have had in the past, both are available to be picked up as of August 6th in the various means that you have been able to do that before. For now, we can all rejoice and have a look at both Sagat and G for Street Fighter V and get to know these fighters just a little better before we take on their roles on the PS4 and PC.

First up, we have Sagat. If you have been keeping tabs on the character, Street Fighter V is definitely not his first rodeo as he started out as the main boss on the original title and has been in pretty much every iteration of the franchise since. All in various roles, but still bringing his Tiger style of things to it all. It looks like Sagat has taken some time to refocus and train as his V-skills and attacks all seem to flow way better than they have in the past and are shaping him up to be the "true king" here in Street Fighter V. At least if you can figure them all out…

Bow down before Sagat, the Solitary King, for his arrival beckons your attention! Sagat’s move set remains true to his previous appearances with his signature Tiger Shot, Tiger Uppercut, and Tiger Knee Crush.

Next up, we have G making his franchise debut here in Street Fighter V: Arcade Edition. He looks to be part "president" and part elemental being if we are to take the word of Capcom on this. In terms of story, he has declared himself president of the world and given that he has taken to looking like a hip-hop, mountain man version of Lincoln, he does take that to heart. He also looks to be blending the same moves from a few other characters in Street Fighter V with a fire element added on. You can see him in action down below if you have not already picked him up in the season pass already and given him a go.

G, the Man of Mystery, bursts in to Street Fighter V: Arcade Edition on August 6! Drawing energy from the Earth to strengthen his powers, G will unite the people as one.

What do you think about these characters for Street Fighter V: Arcade Edition that we have here now? Do you like their additions to the game or will they be picked up and left on the backburner for a while? Do you think this will be the end of the new characters for the game or will there be more to come in the future? Let us and the world know what you are thinking down in the comments and then feel free to discuss. For more on Street Fighter V in any shape or form, keep your eyes glued to the site here. We will keep the updates flowing out there as quickly as we can.