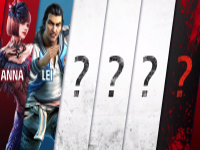 The grand finals for Tekken 7 out of EVO have come and gone and with it we have more to look forward to for the game as a new season of character DLC will be on its way soon. There have been a lot of characters already added in by Bandai Namco, but there is always room for more of the past and future characters to get added into the PS4, Xbox One, and PC game here. It also allows for them to open up even more crossovers from other franchises to happen and make more money for Tekken 7 than before. Now we have a look at a few of the new six characters that are joining the fight here when this "coming soon" thing actually gets here.

In the new season, Tekken 7 will be adding Anna Williams into the mix to mess with Nina in the same rivalry that has been going on in the franchise since it all started. We will also be seeing the return of Lei Wulong into the mix with all of his different styles at our disposal to take everyone else down. Lastly, there was a reason to talk about crossover fighters now, it looks like Negan from AMC's The Walking Dead will be a fighter in Tekken 7 too. As if there was not enough of that show and franchise everywhere already. Nonetheless, it looks like the TV version of the character will be swinging his bat in the game here sooner or later so they can pull more fans in with that.

Have a look at Anna and Lei in action with the new trailer for Tekken 7 that was released with the announcements here. There is also a bit of concept for Negan as well, but seeing as they will have six total characters in the season and the placement of his placeholder in the list, we will be seeing three other fighters join in before he does. Just know he is coming to Tekken 7 and plan as you wish.

Introducing a brand new lineup of warriors stepping into the Tekken 7 ring! With Season 2 of the Tekken 7 Season Pass, fighters such as Anna Williams, Lei Wulong, and Negan from AMC’s The Walking Dead join the fight!

As the personal bodyguard of Kazuya Mishima, Anna Williams is a beautiful and intelligent officer with deadly fighting skills, and serves to drive her sister Nina crazy!

Are you excited to see these characters joining Tekken 7 in the new season pass or did you have your heart set on others? Who do you think the other characters in the DLC will be and will they be others from the franchise's history or crossover characters? How do you think Negan will handle in the game here and will he just be a bat swinging character with nothing truly tying him to his source material? Let us and the world know what you are thinking down in the comments and then feel free to discuss. When we know more for all of these characters in Tekken 7, we will pass it along through the site here. Just be sure to keep an eye out for all of it.