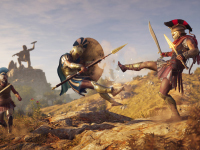 With Assassin’s Creed Odyssey being set in the lands of Ancient Greece and us taking on the role of a Spartan, it makes sense that we will have a whole lot more added to the combat of the game. It would be a huge miss if this was not the case, but given what we have here to look at, it does look like Ubisoft is taking full advantage of it and adding to the winning design that they have found again in the franchise. If you have not figured it out yet, we are here to look at more combat and hunter abilities and skills in Assassin’s Creed Odyssey. At least as it comes to the endgame level of things and not how we all will be starting out on October 5th when the game hits the PS4, Xbox One, and PC.

As you will see here, it looks like there will be a sort of synergy between weapons and gear in Assassin’s Creed Odyssey based on the elemental effects added on. They do focus on the fire bonus here, but I am sure that they all will add into something more along the way depending on the different options we will have. Given that we have more ammo types for our bows as well, it would be safe to assume. If only we would get a "Ghost Arrow" type for the melee weapons then we would be truly unstoppable in Assassin’s Creed Odyssey. If you are wondering about that, those are a new arrow type for the bow that can fire through objects and enemies as you wish. Have a look and see what I am talking about just below.

How are you feeling about Assassin’s Creed Odyssey and its combat after seeing the new options here? Do you think that it would have been better to show off the lower level of things first or better to show where you can be at the end of the game? How do you feel about having arrows that can bypass the game and thus break the reality the game world is set in? Let us all know down in the comments and then feel free to discuss. For more on Assassin’s Creed Odyssey, be sure to stick close to the site here. We will keep the news and updates coming at you as best we can.