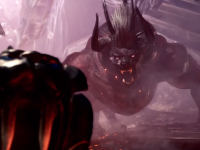 The next major update for Monster Hunter: World is here for the crossover event that is going on with the Square Enix property. It is out there as of now to download and add to your game so you can see more of those Final Fantasy XIV monsters in the world that Capcom has built here. Namely the massive Behemoth that has always been the bane in all of the other FF titles throughout history. Now it will be stalking the grounds of Monster Hunter: World and tasking us to team up to bring it down for rewards and fame in that game. As I said, it is all ready for your downloading pleasure for the PS4, Xbox One, and PC right now.

It looks like there will be more of the FF creatures mixed in for Monster Hunter: World here, but obviously the big focus is on the Behemoth. It will be nice to see more Cactuars running around and a few of the other items mixed in to the game here as the crossover event carries on. For the low price of FREE, can we truly complain about the update here? Sure we can, as it is the internet, but we will not for now and just focus on the new beast for Monster Hunter: World that we can now hunt. Happy hunting all and maybe you will see me in the mix taking it on…

Brave Hunters and Warriors of Light, take up arms! The legendary Behemoth from Final Fantasy XIV storms into the New World on August 1

Are you glad to see the Behemoth added into the mix of Monster Hunter: World now or were you looking for a different monster to be added in at this point? Do you think we will see some of the other Summon creatures added into the game here or will we just be stuck with the classic monsters of Final Fantasy? How hard do you think the Behemoth will be to take down when all is said and done? Let us all know down in the comments and then feel free to discuss. As the updates for Monster Hunter: World keep rolling out, we will update you here. Just be sure to look back at the site to see them all.