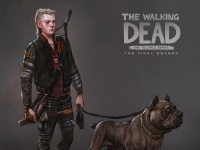 We have had a few teases already of the new cast we will be seeing in The Walking Dead: The Final Season and it looks like many of them will be around Clem's age for once. That is all assumptions based on what we have seen before from Telltale Games for this season as we have yet to experience more than that and what little we do have in the latest Demo for the game. August 14th is only so far away and it is time to get to know some of these characters we will see added into The Walking Dead universe here and that day is today. At least as it comes to three of the characters. Unless you want to count a dog as another character. As this is the internet, we will so we now have four characters to look further at in preparation for the release here soon.

Here we have Marlon, Violet, Louis, and Rosie to meet for this outing of The Walking Dead. All of whom seem to have holed up in the Ericson Boarding School for Troubled Youth. For reasons yet to be seen, Clem and AJ will find themselves here and dealing with these four. Marlon is the defacto leader of the group with Rosie by his side. Kind of sounds like Ezekiel and Shiva from the core story but made "kid friendly" here. Then we have the "tough girl" with Violet and I have a feeling she will be the one who causes more problems than fixes. Lastly, we have Louis who sounds a bit more like plucky comic relief in a world that desperately needs it. As if we have never seen this in The Walking Dead before… Chaos can only reign for so long before someone steps in to decide what’s what, and Marlon chose to wear that crown. As de facto leader of Ericson’s, he’s responsible for its occupants’ survival and overall well-being. A keen hunter, Marlon keeps the kids fed and protected with help from his razor-sharp arrows and his ferocious furry friend Rosie. Clementine loves dogs, right? Oh, wait… If Ericson’s had a welcoming committee, Violet probably wouldn’t be selected for it. Not everyone’s a people person, and Violet has no illusions otherwise. A tough world calls for tough people, so it’s no wonder Violet’s survived so long. She’s not without a heart, she’s just learned that all-too-important lesson to keep it as guarded as any other body part. Quick-witted and silver-tongued, Louis’ spirit is a sharp contrast to the often-drab attitude of his fellow students, always finding time for a joke or card game even on the darkest days. Louis is proof that all the light out there isn’t gone, no matter how much the world insists otherwise. Louis just laughs back in the world’s face. What does he have to lose? Oh, and the guy’s a classically-trained pianist as well. You thought only cops, lawyers, and gym teachers survived the apocalypse? Guess again.

How do you think all of these characters will truly fit into The Walking Dead: The Final Season? Do you see them playing out as their "adult" counterparts do in the comics and/or shows? DO you think they will have found some kind of equilibrium of sorts that will force some outside force to be the true conflict of the game? Let us know down in the comments and then feel free to discuss it all. For more on The Walking Dead: The Final Season, be sure to keep checking back here. We will keep the updates coming as fast as we can get them.