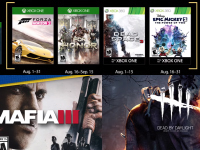 A new month is almost on us here with August and that means new video games that we are going to get for free. Well, video games that you will get for free if you are part of the PlayStation Plus or Xbox Gold services. If you are then you may be in for a treat as the list of titles going live starting next month is here and we have it for you. Again, we get to expand out titles on the Xbox One and PS4 without needing to make any extra spends at our local stores.

Some amazing video games are being offered up here yet again for this month. Mafia III is totally a game that I think everyone should play even if not all the way through. Then we have the amazing Dead Space 3 brought back into the limelight here. Not to mentions some of those other great video games that some of us may have missed out on like Dead By Daylight and For Honor. Then we also have two other titles added on the PlayStation side for those with a PS VR or interested in something for PlayLink. Not too shabby at all.

Here is the list of games we will all get for our PlayStation systems starting on August 7th of 2018.

Here is the list of games we will all get for our Xbox systems starting on August 1st of 2018.