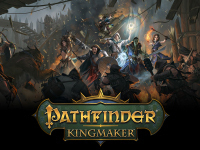 The release date for Pathfinder: Kingmaker has been set and we will be mixing it all up in the Stolen Lands of Pathfinder in extremely short order

One more update is here for Pathfinder: Kingmaker and it is a big one here. We finally have a release date for the digital version of this adventure path that has captured many imaginations and Owlcat Games has poured in so much time and effort into bringing it to life. For me, it was a bit of a concern that Pathfinder: Kingmaker would have been pushed out way out there given that the title had been picked up by Deep Silver. Thankfully, it does not look like they have done much to change the team's original idea but made it so they did not have to worry about where their funds are coming from. Now we can look to September 25th to dive into the Stolen Lands on our PCs.

I know I have been personally excited for all of this as I have and am currently playing in the tabletop version of Pathfinder: Kingmaker and would love to see another take on it all. I know I was kind of hoping to see more of the other classes, spells, and other books make their way into the game but it looks like we are going to be sitting with the fourteen classes mentioned in the Kickstarter phase of things as well as dozens of the Archetypes for them. I am curious on the 1000+ spells they are pulling from Pathfinder in general, as I know some would be hard to code for, but we will not need to wait that long to dive into all. All of which I am okay with.

Pathfinder: Kingmaker will take players on a tour through the infamous Stolen Lands, the dangerous and turbulent territories well known within Pathfinder fandom. The computer RPG will revisit familiar characters and well-known locations of the series’ lore as well as treat players to brand new adventures, deadly foes and unforeseen twists and turns. Fans of the fantasy pen-and-paper RPG will experience its epic, heroic universe in new ways while computer RPG gamers will discover their favorite genre in a more contemporary light, in stunning 3D graphics that bring the universe to life.

Pathfinder: Kingmaker will challenge players as both adventurers and rulers as they will be able to claim explored lands and carve their own kingdom from the wilderness. Kingdom founding will go beyond simple stronghold-building to become a true reflection of the hero’s character and choices made throughout the game. Each kingdom will be a living thing shaped by alignment, choices, allies, and the hero’s ability to lead his or her people.

Are you ready for Pathfinder: Kingmaker to finally land or did you hope that Owlcat Games would have taken more time to get more content into it all? How do you think that team will handle some of those more obscure spells in the tabletop version for this one? Do you think that Deep Silver will have them put out DLC to expand on the classes and such or will it stay where it is at this point? Let us all know down in the comments and then discuss. I am sure we will have more for Pathfinder: Kingmaker here soon. Be sure to keep checking back here for more on this game and many others.