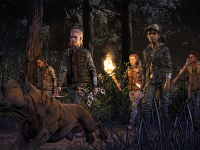 The first episode of The Walking Dead: The Final Season kicks off on August 14th for those who aim to play it on the PS4, Xbox One, or PC. For those looking to see how Telltale Games is wrapping up this story on the Switch you will have to wait a bit longer for that. This is most likely not why you are here right now as this is not the biggest of updates to go with for this version of The Walking Dead. Maybe it is, but then you may have missed out on the new gameplay that came out for the game during this year's SDCC. Yes, we have some more to actually look at for the game to see how it is all getting changed up to give us a great ending.

That all said, let us move right along to the gameplay for The Walking Dead: The Final Season here. It is short and sweet with a bit of a tease for what we should expect from the game, but I have a feeling this is not all from the first episode alone as it does look like there is way more going on and some extra trust spread out there that Clem would need some time to build. I could be wrong and this is a different version of The Walking Dead than we have all been led to believe. I doubt that, but you can see what I am talking about just below with the little bit that was out there for the masses who did not make it out to the convention this year.

All players who pre-order The Final Season will receive download access to each of the season's four episodes as they become available. Players who pre-order on PS4 and Xbox One will also receive immediate access to The Walking Dead: The Telltale Series Collection, which gathers all 19 existing episodes of the award-winning series into a single package.

PC players who pre-order on Steam, GOG, GamersGate, or the Humble Store will receive 10% off the full retail price. Win10 pre-orders through the Microsoft Store will unlock season one of The Walking Dead: A Telltale Games Series. All pre-order offers expire August 14.

Clementine, now a fierce and capable survivor, has reached the final chapter in her journey. After years on the road facing threats both living and dead, a secluded school might finally be her chance for a home. But protecting it will mean sacrifice. Clem must build a life and become a leader while still watching over AJ, an orphaned boy and the closest thing to family she has left. In this gripping, emotional final season, you will define your relationships, fight the undead, and determine how Clementine's story ends.

Now that you have been properly teased here, let me present to you the first fifteen minutes of the first episode of The Walking Dead: The Final Season. At least as it has been coined so far and shown out during one of the panels that took place out at SDCC. It focuses way more on how Clem and AJ's relationship has grown and where both of the characters are at this point. It also looks like there will be a lot of callbacks to the past seasons with how some of the events play out and the struggle to keep a decent morality in The Walking Dead universe. I will not mention more as it could spoil this whole part of the episode and those trying to stay spoiler free can just move right along at this point.

How are you feeling about the changes to The Walking Dead that we are seeing in The Final Season here? Does the action seem to flow a bit different given the multiple QTE prompts that will have to push or will it flow better when we have it in our hands? Do you think that we can ignore the moral quandary in the scene here by just taking action or will Telltale Games force the case to drive the story down a specific path? Let us know what you are thinking after seeing all of this and then discuss all down in the comments. When we learn more for The Walking Dead: The Final Season, we will update the site with the information. All you have to do is keep checking back in to stay up to date.