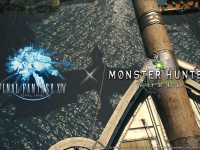 We now have an official date on when Monster Hunter: World will be crossing over into Final Fantasy XIV since we first heard about it at E3. It would have been nice for Square Enix to give this date back then, but maybe Capcom just was not ready for this to happen and held it off. All of that would be weird given that the official date we will see this Final Fantasy and Monster Hunter mix up will now be on August 7th. Only a few weeks from now and so much to do if you truly want to take part in this whole cross over event.

First, you will need to update your copy of Final Fantasy XIV to the 4.36 patch that will come out. Not too difficult. Then you will need to be at least level 70 and have completed the Stromblood main scenario. Once that is all done, you will be able to get your Monster Hunter on as this will open up the trial “The Great Hunt” on Normal and Extreme. Here you will be treated with an event to take on the mighty Rathalos seen in Monster Hunter: World and take it down for your own rewards and extras in the game. The Normal version having eight players team up and the Extreme allowing only four players.

Have a look at how this beast from the Monster Hunter universe will look in action when the event fully kicks off.

The highly-anticipated collaboration between Square Enix and Capcom arrives in Final Fantasy XIV: Stormblood this August 7. First revealed during this year’s E3, the upcoming crossover uniting two beloved and wildly successful games will have Warriors of Light challenge the “King of the Skies,” Rathalos, from Monster Hunter: World.

The crossover arrives as part of the Patch 4.36 update, alongside the next installment of The Forbidden Land Eureka, titled The Pagos Expedition. Level 70 players in Final Fantasy XIV: Online who have completed the “Stormblood” main scenario quest may take on the mighty Rathalos in both Normal and Extreme versions of “The Great Hunt” Trial. While the Normal version will have eight players team up to face the legendary beast, the Extreme version will challenge four players to defeat the monster, with numerous unique mechanics included as a homage to Monster Hunter: World and its gameplay.

How do you feel about the Final Fantasy XIV and Monster Hunter: World collaboration now that you know more of how it will work? Is this exactly how you expected it to go down or did you want to see something else happen in either game? Do you think this will be successful enough to warrant another event like this or will it be a one-and-done kind of deal? Let everyone know what you think down in the comments. If there is more on this Monster Hunter: World and Final Fantasy XIV cross event, we will update you here on the site.