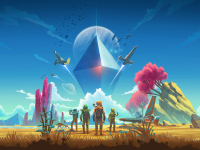 Even though No Man’s Sky never lived up to the hype that gamers gave it before know what the game was actually all about, there is another major update coming to the game. Yes, even though it did not do what fans wanted, Hello Games has been working hard on keeping the game going and adding new features leading up to the release of the game on the Xbox One here soon. Even though the actual number of changes for No Man’s Sky is a lot higher, the team has put together a new trailer to inform us all of the eleven big changes to the game that have hit or will be hitting the PS4, PC, and the Xbox One all on July 24th here. Maybe it is time to look back at the game again.

You can see more of these in the following video here, but the highlighted changes for No Man’s Sky include a regenerated universe, newly opened portal stargates, new biomes, deeper trading, exocraft for advanced exploration, new modes (Survival, Permadeath, Creative), base building, new missions & story, terrain manipulation, crashed & interstellar freighters, and deeper space combat. All kinds of things that gamers expected to see in No Man’s Sky since launch, but as it is an ever-evolving title, it makes perfect sense that it needed a bit of time to get together and out there. Can we all still be “that” upset still?

No Man’s Sky — 11 Things That Have Changed Since Launch

It’s an exciting and super busy month for Hello Games and No Man’s Sky as we have our massive NEXT update launching across all platforms on July 24, and for the first time on Xbox One!

We will be sharing more details about the new content in the run-up to launch. But a question we get asked all the time is ‘what’s changed in No Man’s Sky?’, so our friends at 505 Games have made a handy vid “11 Things That Have Changed in No Man’s Sky Since Launch” to remind everybody about the many many things that have changed… since launch.

What do you think about these updates coming to No Man’s Sky for all platforms here? Will these be the ones that will get you hyped back up for a game you misunderstood from the start? Will this also be the last big push to see if they can get more traction on a game that gamers ruined and not the developers? Let us all know down in the comments and then feel free to discuss. For more on No Man’s Sky and many other games that you may not fully understand, keep checking in here. We will keep updating you on what we can and hopefully better inform you for the future.