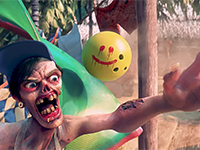 Another addition to the Dead Island franchise is here as Dead Island: Survivors has launched and available for your mobile device now

If you were hoping for some more zombie killing fun, then get ready as Dead Island: Survivors has been launched today for all of those needs. Yes, today as Fishlabs wanted to get this out for us all to play and get back into the world of the franchise. All in a kind of base defense game that will bring us all of the fun and nostalgia of the original Dead Island but mobile for the iOS and Android platforms. It may not be the official sequel we have been waiting for since Deep Silver announced that so long ago, but it is something to hold us over. Also to show us that they are still interested in keeping it all up and running. There could still be hope.

Dead Island: Survivors is listed as an action-brawler title that will blend melee combat and trap laying to progress through the game and story. The usual and iconic characters from the franchise look to be in there as well. Most likely more as we will be tasted with traversing Banoi again and finding all of the Easter Eggs and other heroes mixed in to give us all the nostalgia of the original titles. Just enough to hold us all over most likely as hopefully, it is just a set up for something bigger to come soon. Nonetheless, I'll be diving in to give it all a go as it is free and will hopefully show we all have interest in the franchise still.

Dead Island: Survivors offers action-packed gameplay mixing melee combat and trap laying with tactical base building and fun card collecting. It is set in a beautiful albeit zombie-plagued game world in close vicinity to the island of Banoi. Created with true love for the genre, the content-rich title features a wealth of different heroes, zombies, weapons, traps, consumables, levels and missions. Fans of the previous Dead Island games will be delighted to discover all kinds of tie-ins, Easter eggs and references as they play.

Is this the Dead Island title you were expecting to see here or were you looking for something larger? Do you think that this will keep the franchise going for a whole new title or is it a simple grab for the nostalgia it looks like at first glance? What heroes of the game are you hoping to see mixed in here and do you think we can unlock them all for free as well? Let us all know what you are thinking down in the comments and then feel free to discuss. If Dead Island: Survivors turns into something larger, we will have that news here for you. Just be sure to stick around so you can see it all.