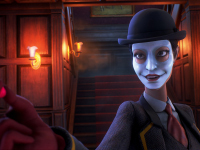 More good news is here for We Happy Few as it looks like it will be heading to Australian markets after all. It was looking like it was not going to be making it a little while ago when Compulsion Games submitted it for review and it was denied by the board down there. After an appeal submitted and a lot of fan support, it looks like We Happy Few will be getting an R18+ rating now and will be keeping its August 10th release date on track for the PS4, Xbox One, and PC. That would be the same for the rest of us out there who are already secure in knowing we will be getting the game.

The next bit of good news there for We Happy Few in Australia will be the fact that none of the game's content will be modified to reach the same rating that is now coming for the game. Usually, an appeal would have called for some kind of censoring or removal of content, but it looks like that will not be the case at all here. Good news all around for those looking forward to We Happy Few. Unless you were one of those dirty pirates looking to bootleg the game down there where it was banned. Then you are out of luck as gamers all over can buy it mostly freely.

We Happy Few Coming To Australia

We went to a great deal of effort to get this decision overturned. We Happy Few will be rated R18+ in Australia.

We are extremely pleased with the decision of the board and excited that our Australian fans and new players will be able to experience We Happy Few without modification.

We want to thank everybody who got involved in the discussion, contacted the board and sent us countless messages of support. Your involvement made a huge difference.

We Happy Few is a narrative-driven action-adventure game set in a retro-futuristic 1960s England. Uncover the mystery of Wellington Wells as you play through the interwoven narratives of three moderately terrible citizens trying to escape from a lifetime of cheerful denial.

Did you expect We Happy Few to be blocked by the ratings board down in Australia or did think this would be the outcome? Did you also expect to see some kind of modification to get the game to ship or just another pass to get things better gauged? Does any of this matter to you and you clicked in thinking there was something else going on for the game? Let us all know down in the comments and then discuss. We should have more for We Happy Few in the near future, so be sure to stick close to the site here. Be happy we do have what we have as it could always be worse…