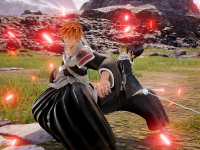 Heads up for all those anime fans out there who have been keeping an eye on Jump Force since it was recently announced. It looks like three new characters have been announced for the game as Spike Chunsoft is adding in Bleach characters to the fight. Ichigo, Rukia, and Aizen to be exact will be joining the fight of Jump Force as you can see down in the screenshots. Not the largest of surprises as I expect to see all of the IPs that Bandai Namco have access to will be joining in when the game launches in 2019 for the PS4, Xbox One, and PC.

While we do have the announcement for these characters coming to Jump Force, there is still no description as to how they will actually handle. Also, there is no gameplay to see them in motion and the following screenshots only show us the more generic side of the fight. At least as I see it. This could also be linked to the fact that I have yet to be impressed by Jump Force, even with hands on, and I suspect it will be the fanboy and fangirl wet-dream of characters by the end of it all. All of whom feel like the same character with different skins and pre-generated action scenes. I hope it will shift from a button masher into a solid fighter at some point.

Ichigo, Rukia and Aizen from Bleach join the cast of Jump Force. Coming straight from the latest arc of Bleach, Ichigo and Rukia are ready to unleash their bankai against Aizen!

Are you glad to see Bleach join in for Jump Force or did you have your heart set for a different IP? Were these the characters you expected to make the jump over to the game or did you think there would be a different set? What other IPs do you think we will see make the full leap over into the game before launch? Let us have all of those thoughts and speculation down in the comments and then feel free to discuss. When we have more to share for Jump Force, we will certainly share it. Just be sure to keep checking back in on the site to see and hear it all.