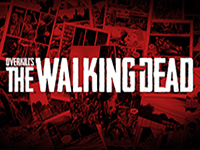 During all of the build-up to E3 we finally had a chance to see some of the gameplay we can expect for Overkill’s The Walking Dead. It was not much, but enough to give a feeling for where Starbreeze could be taking the game and I know I had many speculations on just where it would go. Speculation no more, though, as 505 Games brought me in to actually sit down and give this addition to the The Walking Dead universe that Overkill has been putting together. All to better understand what we should be getting on November 6th on the PS4, Xbox One, and PC. At least if things are not drawn out any further.

As I speculated before, Overkill’s The Walking Dead has a whole lot of similarities from past titles where a group of four characters teams up for reasons in a zombie apocalypse. I believe Left 4 Dead came up quite often. That was still very much the case as the group I was playing with prepared for our first foray into the game. We each selected a character of the four we were offered and were instructed on the special skills or abilities they brought with them. There was a healer, a sniper, a brute, and an "engineer" type. That was the one I went with while the rest of the group split up as they felt fit to play. A quick loadout set up and then we were off to play.

Even in its early-ish state that it is in, there was still a solid array of weapons we could take an extra piece of gear that made no sense to take at the beginning. We each took different ones, as recommended, but did not understand how it would all work into the mission we were about to undertake in Overkill’s The Walking Dead. Nonetheless, we set out to go and reclaim a stole water purifier from a rival group out there in the harshness of the zombie apocalypse. Spoiler alert, we were not truly ready for what was about to come at us.

Launches November 6th in North America, November 8th in Europe/everywhere else. Pre-order available on PC, Playstation 4, Xbox One and in stores. Pre-order June 12th for access to exclusive in-game items.

The first thing I noticed when entering in this world of The Walking Dead was that Overkill had taken great care to recreate a living world in this fantasy universe. It had the realistic nature of the environments but also felt like it was grounded in the comics. At least in terms of grime and not in an artistic style. It all felt like a real place and their goal of making the environment tell stories as well as the characters truly shined on through. It all had place and purpose even if it was not readily available to perceive right out of the gate. Be ready to search around and explore when you play is the best takeaway.

After taking all of that in, I was snapped back in as we all started to head toward our objective in the mission. We all tried to sneak our way through and use the melee weapons we had at hand here. In true fashion for The Walking Dead, the walkers would not stay down unless you hit them in the head. They were also attracted to noise and other things in the environment that we could use to our advantage, but sadly kept using against ourselves. Cars will randomly have alarms, gunfire will make noise, hitting other objects in the game will make noise, and even killing shots can make enough ruckus to draw in more walkers. This, of course, made searching the grounds for ammo and other items a bit more difficult than we could imagine.

About halfway through the mission is where we learned another feature in Overkill’s The Walking Dead, weapons and humans would act as they do in the real world. Guns will jam, silencers will break, humans will call for help when someone walks to close to a place they should not be. Needless to say, one of the players in our group ignored the fact the silencer on the gun was broken and tried to headshot a walker. The noise drew in the humans, the walkers in the area, and then alerted surrounding walkers to come in and swarm as well. The onslaught became way too much for us and our mission did not make it to completion…

Thankfully, this let us take a look at a different mode or style of mission in Overkill’s The Walking Dead. It was like a Horde mode from other titles where we were required to build up defenses and then defend a location as walkers swarmed from all around. Instead of the extra gear we selected before the other mission, we were given the option to pick up barricades and traps to help defend our location in the mission. We all did the same, loaded up the map, and then took the sixty seconds to try and set up decent defenses around the area. We later found we could have also built barricades further than what we loaded with, but well after the swarm had come.

Due to all of that, it played out in the worst way possible for anyone surviving in The Walking Dead universe but quickly became one of the most fun experiences I had at E3. Even though all of the gameplay mechanics looked to be based on other franchise's, as the main one also was, it married together so well and made it even a blast while playing with three strangers I had never met before. I can only imagine how it would all pan out had we all known each other and had time to talk tactics before hopping into the game. Plain and simple, Overkill’s The Walking Dead is on the list to watch for and get excited to play when it launches in November here.