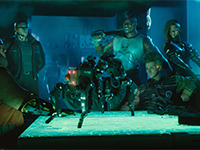 The moment most of us have been waiting for has come as we now have something solid to look at for Cyberpunk 2077 other than teaser images and concept art. We have had so little to see for this game and yet CD Projekt RED has had us all so hyped up for the game since it was first mentioned they were working on it. It could have been because it was something new that few have actually taken on or it could have been them still riding on the hype of their last few titles that have impressed us all. Nonetheless, we now have something to see for Cyberpunk 2077 that also looks to be done in-engine and not just a CG trailer. All of which based on other things that I have seen out at E3 2018. The right level of hype for this PS4, Xbox One, and PC game is here yet again.

The following trailer does a great job showing us the very Mature world of Cyberpunk 2077 as well as one way the game could be played here. That is, we see a male protagonist running around in the world here, but we can play as a female from the start of the game as well as customize everything that we can think of when it comes to the cosmetic and look we want. Kind of like how it should be in a game like Cyberpunk 2077. So, just know what you are about to see here is just one of the possibilities on how the protagonist can look in the game and things are always in flux as you so wish it to be. We will have more on that at a later time, but for now, we have the new trailer to look at and get our hype levels topped back off for the game here.

Cyberpunk 2077 is a narrative-driven, open world RPG set in the most vibrant and dangerous metropolis of the future — Night City. You play as V, a hired gun on the rise, who just got their first serious contract. In a world of cyber-enhanced street warriors, tech-savvy net-runners and corporate life-hackers, today is your first step to becoming an urban legend.

Are you properly hyped up for Cyberpunk 2077 again or does a trailer like this not do it for you? How are you feeling about having the option to change the gender of the protagonist here or do you think the team should have left it completely open given the state of the world? What specifics are you looking for out of the game that you did not get teased with here? Give us all those answers and more down in the comments and then feel free to discuss. We were able to see more for Cyberpunk 2077 out at E3 and we are still trying to digest it all in. Once we have that complete, we will have a full breakdown of what is known for the game out of E3. Just be sure to come back and check that all out.