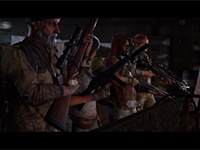 The wait is over and we finally have some gameplay for Overkill’s The Walking Dead to look at instead of all of the amazing little teases and pre-rendered segments we have been given so far. Not that I have not enjoyed what Starbreeze has put together for those little bits, but I know I just want to see what I will be playing for Overkill here and not just the fancy stuff we will not be playing. All without having to wait until November 6th to get to actually see and play this version of The Walking Dead on the PS4, Xbox One, and PC. Yes, we now have a release date here and it looks like that whole Fall of 2018 this we heard at E3 in the past will be a solid release window and such. I will take it for sure.

Just as I thought, Overkill’s The Walking Dead is a four-player online multiplayer game in the same likes of Left 4 Dead. It is a first-person shooter style game where each of the four characters will have different roles to play as we unfold the story in the world, scavenging for goods, and take down human enemies in the world. The only difference we have here from that title and others like it is that we are promised a story on par with the many we have had for other titles in The Walking Dead franchise. Given that the actual gameplay seems as basic for the genre, that will need to be the true selling point to make it stand out in the sea of other games like it. At least that is how I see it as the gameplay will show you just how it looks and feels like the plethora of other titles in the zombie, four-player, survival genre we have here. Take a look and see what I mean.

Launches November 6th in North America, November 8th in Europe/everywhere else. Pre-order available on PC, PlayStation 4, Xbox One and in stores. Pre-order June 12th for access to exclusive in-game items.

What do you think about Overkill’s The Walking Dead now that we have some true gameplay to look at here? Do you agree that it looks like other titles in the genre and will need the high-level story the franchise is known for to help it stand out or not? Are you surprised at all that this is the direction that the team went with the game here or will it be different enough to make us ignore all of the similarities from the other titles? Let us all know down in the comments and then feel free to discuss as you wish. For more on Overkill’s The Walking Dead, be sure to keep your eyes on the site here. We are still excited to see what the game holds and will keep bringing you all of the updates that we can for it.