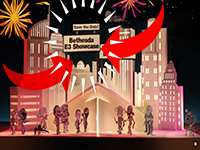 I am still too tired from the emotional rollercoaster that was the BE3 conference. I had to watch it twice to make sure I understood correctly. Boo to Fallout being online and hurray for their being a new Fallout game! That helmet is beautiful and I will never take it off. Let’s get started, shall we?

It has come to pass. We have word from the mouth of our master Todd Howard during BE3 that Fallout 76 is online, “Always online” is his exact words. I have terrible flashbacks from EA’s SimCity. That was a dark time. I was so enthralled with the idea of a new Fallout game I almost didn’t want to believe the rumors though when my ears heard the words “Always online.” I went stone cold. All my excited went rushing from my body like a damn breaking. Still cautiously optimistic by Todd admitting it wouldn’t make sense for it to be an MMO type game with twenty players queuing up to turn in a quest. It still irks me that the random element of other players showing up and ruining my experience. Listening to a friend’s stream who are not huge fans of Fallout really don’t mind it being online. They think it will be fun, but to his credit they are youths. Most young people don’t hold things in as high of a regard like veterans of the series will. I love the stories where the protagonist is the Chosen ONE, the LONE Wanderer, SOLE Survivor, and so on. The beauty of Fallout was the carefully constructed world where you are this person, but you chose who that person is. They have flipped the script to where it doesn’t matter who your character is. You hold no significance other than just existing. To some people that may be enough, but coming from a Fallout game where the draw is interacting with the world and story crafted around that. To have some random nobody ambush you halfway through a difficult mission and killing you would just piss me off. While the story of the Fallout games does not always tug at my heartstrings, Fallout 4’s story comes to mine, how can I care if I do not think about the story at all for hours at a time? They are deeply personal.

Take New Vegas for example. What starts out as a simple tale of revenge leads you on a path to decide the fate of the entire Mojave Wasteland and possibly the entire western part of America. I do not want another Fallout 4, or Borderlands type of RPG where every quest is going to a place to clear it out and bring an item back sometimes. Sure Borderlands did have a few wacky and cool NPC’s but fans of Fallout deserve better than that. On a brighter note I am excited to see new creatures being introduced into Fallout. One of my favorite things about the Fallout 4 DLC was that we actually had new enemies while the base game was just enemies from Fallout 3 with texture mods. I did see a Deathclaw in the gameplay footage but I am sure Bethesda did not put much thought into it so I am not going to over-analyze it too much. The C.A.M.P. system looked really cool, but it is still too early to know what kind of bugs and hell the players will have to endure when using it. At least Todd has a sense of humor and admitted sometimes it “Does not just work.” Hopefully Bethesda will realize with this game that while fans will fix these games out of love they should not have to.

Next up from BE3, we have all the Elder Scrolls! I mean all of the Elder Scrolls. Skyrim is coming to at least a dozen more platforms. Legends is going to everywhere, Blades is looking to capture that old arena feel on mobile and probably everywhere else by next years time. Two new expansions for Elder Scrolls Online ensuring at least a few more years of longevity for the game which is never a bad thing. The mack daddy of all is that it can be said with one hundred percent certainty that The Elder Scrolls 6 is coming out next year. It still has not sunk in completely. It was such a curveball from Bethesda who likes to keep a tight lip on everything until the last possible moment. One of the things I keep coming back to is the relief of knowing even with an online game that they still are interested in pursuing single-player games. I am not a huge fan of playing online card games or MMOs so I can not talk at length on them, but as someone who has gone back to play the original Elder Scrolls games, I am particularly excited for Blades. I have been saying for years that Bethesda should release the older Fallout games on mobile with more modern graphics, but it never occurred to me they would do that for the Scrolls series.

Does anyone else remember the canceled DOOM 4 which everyone thought would be trash? Well, it has returned in the form of DOOM Eternal out of BE3. I think a big difference this time around will be the lack of a story. DOOM 4 was looking to be more a generic Call Of Duty style FPS which no one wants, but the DOOM from back in 2016 went back to the series roots with fun, frantic arcade action that made DOOM a big hit in the first place. It seems they will put that playstyle in the setting that DOOM 4 would take place. Personally, I do not know if I like the idea yet or not. I know it will a fun game regardless of setting so we will see later on when more details are revealed.

Time for some rapid-fire points from BE3. Starfield! I am super excited to see an original IP from Bethesda since it has been twenty-five years since Bethesda introduced an original IP which has since spawned several games of a huge variety of games. If you did not know it was Elder Scrolls. No details as of yet though.

Prey is getting features that have taken over a year to bring to the game. Not sure if I had bought Prey I would go back to it for a few cool new features but I can not complain about a studio actually giving fans what they want to keep up the good work.

Wolfenstein is continuing what did with having an offshoot adventure after the big game. This time around they are bringing a co-op element to proceedings. Not much more to say about that until later on when we get more details.

Rage 2 looks to have nothing to do with the original and for better or worse. After playing the first Rage, I felt unfulfilled and as a result, I do not really care about the new one.

On my live stream of BE3, I praised Quake for being hopefully one of the better eSports. I hate competitive Overwatch because it looks identical to casual matches. Plus I dislike to tokenism that comes with character-based shooters. Then they showed the Quake trailer and it looks to be a rip off of Overwatch so my excitement was squashed.

I think that is everything. I nearly forgot about Rage and Quake even though I watched the BE3 stream twice to get all my notes right. I liked the live Andrew W.K. performance, but by minute ten it wore on me hearing that song so much. A lot of awesome things from this conference unlike last year, and some things I am apprehensive about. Overall, I am excited for the next few years.