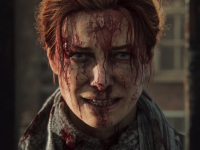 Today marks the day that all of the characters for Overkill’s The Walking Dead have been revealed and now we will hopefully be seeing some actual gameplay or other elements for the game moving forward. Not that I do not enjoy the CGI videos that Overkill has for each of them, but I think it is high time for a look at what we should actually be getting in Fall of 2018. Maybe it is just me? For now, we have the next and final character named Heather joining this version of The Walking Dead. Just as it has been before, she also comes with a pretty harrowing journey that has shaped her into what we will most likely be playing.

As with most of the other characters we have seen for Overkill’s The Walking Dead, Heather is a tough survivor doing what needs to be done to just carry on. There does not look like much in the way of what brought her to the place we find here in the trailer here. She just kind of is scavenging and then is harassed by a few others that seem to know her somehow. There is no word on how she got to be where she is, but she definitely looks to be a very capable character in the world. At least as capable as most who have survived this long in The Walking Dead. Have a look and see what I am talking about and then get ready to wait for some actual gameplay to come.

Meet Heather, the fourth and final of the heroes you can play as in Overkill’s The Walking Dead from Starbreeze Studios.

What are your thoughts on Heather here for Overkill’s The Walking Dead? What do you think her backstory is filled with and is it as heartbreaking as a few of the other characters we have seen for the game? How do you think all of them will link up and will it all be in a Left 4 Dead kind of way? Let us and the world know your thoughts down in the comments and then feel free to discuss. As more for this version of The Walking Dead, or any other, is revealed, we will have it here on the site for you. All you need to do is keep checking back to see it all play out.