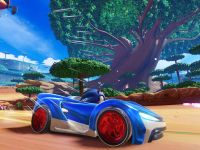 First it was rumor, then denied, then "leaked," then denied, the leaked again, and then Team Sonic Racing was finally confirmed to be a thing that will be coming to the PS4, Xbox One, Switch, and PC. That is at least how this title has gone for this year so far as Sega has been holding off on getting the full announcement out there. Thankfully, they stopped and just let the announcement for Team Sonic Racing to finally come and to show off just what Sumo Digital has been "secretly" working on for a bit. All of which has just gone down in the first part of this year alone and not just something right before E3 surprisingly.

Anyways, now that Team Sonic Racing has been confirmed to be a thing, it is time to dive into what there is out there before gamers will have a chance to get their hands on it next week. At least those lucky ones out there or the ones who have a load of patience to stand in lines. Everyone else can have a quick look down below to see a bit of what we have for Team Sonic Racing right now and see if it will be worth the time. Given that it already looks like a version of Mario Kart just with the Sonic character, I can see it making a larger splash than many have thought. Have a look for yourself and see if this will be a thing you are interested in knowing more about.

Team Sonic Racing arrives this Winter! Race in a team with your friends (or against them) both offline and online, and choose from a variety of characters and tracks in the Sonic universe!

How are you feeling about Team Sonic Racing based on the little bit that we have to share here? Do you think it looks a lot like a Mario Kart clone or will there be more to it that these short bits have yet to show us? Are you at all shocked that this was in the works or were you keeping a close eye on the rumors well before they were all owned? Let everyone out there know what you are thinking down in the comments and then feel free to discuss. When we see or hear more for Team Sonic Racing, we will have it for you on the site. Be sure to keep coming back to check it all out.