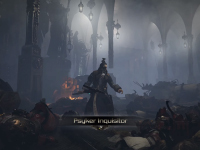 A new feature trailer for Warhammer 40,000: Inquisitor — Martyr is here to show us the PC version of the game and what to expect for Warhammer on the consoles

Today, on the PC at least, Warhammer 40,000: Inquisitor — Martyr has released while PS4 and Xbox One owners will have to wait until July 5th for the same release. This is something that many of you should have known for now; at least if you have been following along with NeocoreGames' development of the game and few releases for the action-RPG. Not everyone can keep up with everything though, so you may have missed out. For those, and those gamers who want to know what they are about to get into, we have a new "features trailer" for this Warhammer title. It is part launch trailer too as it is here to get everyone ready to jump into the dark world they have to present.

Sadly, this new trailer does not show off much more than what we already knew was coming to Warhammer 40,000: Inquisitor — Martyr here or to an action-RPG in general. There will be classes, random missions, blood, gore, and all of the lore one would expect from a Warhammer title. Although it does look like there is a lot more action to the game than RPG. At least based on what we get to see here. I am also curious on how the "boss system" will work. It looks more like a normal boss system we have seen time and time again, but maybe there is something different. I know I would have liked to see more description instead of the title of the feature and a small gameplay clip. That is why we will need to dive in and play directly today.

Our latest trailer shows all the major gameplay features of Warhammer 40,000: Inquisitor — Martyr.

Warhammer 40,000: Inquisitor — Martyr is an innovative Action-RPG developed by NeocoreGames.

Are you fully ready for Warhammer 40,000: Inquisitor — Martyr here or will you be waiting for the console release of the game to fully give it a chance? Do you agree that it looks like a normal action-RPG more than anything, just with a 40K setting to it? How do you think the "boss system" will work or will it just be the way they bring in the tougher enemies for us to fight? Let us all know down in the comments and then feel free to discuss. For more on Warhammer 40,000 and the plethora of titles that are coming out for it, just keep your browser here. We will keep those updates coming at you.