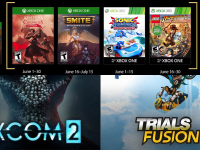 A new month is almost on us here with June and that means new video games that we are going to get for free. Well, video games that you will get for free if you are part of the PlayStation Plus or Xbox Gold services. If you are then you may be in for a treat as the list of titles going live starting next month is here and we have it for you. Again, we get to expand out titles on the Xbox One and PS4 without needing to make any extra spends at our local stores.

Not the most solid list of titles to have here but I will bet that is based on all of the other big video games that have just launched and are already taking much of our attention already. You cannot go wrong with SMITE and, of course, XCOM 2 is also another solid title that we can add to the mix. The rest of the video games here feel like they just needed to be added for now and hopefully, this will lead to a solid list for July. This is generally how it runs here for June and then around the winter holidays. But hey, free-ish games are free games.

Here is the list of games we will all get for our PlayStation systems starting on June 5th of 2018.

Here is the list of games we will all get for our Xbox systems starting on June 1st of 2018.