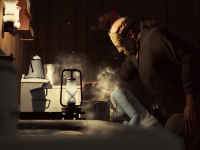 The wait is almost over for all of you fans of single player games who kind of missed out on Friday The 13th: The Game due to your proclivities. It looks like that single-player mode for the game that IllFonic has been hammering away on for the game is about ready and as Gun Media has announced it will be part of the update that is coming on May 24th. Yes, that is about two days from when this is originally being written so if you are reading this in the future, just take note. At least by then Friday The 13th will most likely have said update already up and running on the PS4, Xbox One, and PC so this will just be a reminder to hop back in and experience it all.

Now before you solo artists out there get overly excited to the point where you will let yourself down, this is not a full campaign for Friday The 13th that you can play solo but just a different mode to experience. As it all sounds and looks so far, it will be a set of challenges and minor missions we will undertake where bots will fill in the rest of the roster. Some of these missions may be to just escape while others will have you out there as Jason trying to end the lives of those counselors over and over. All in the true Friday The 13th manner. I do hope this makes it easier to experience all of those great special kills that the team has put in the game that are next to impossible to pull off in live matches.

This update will also bring along a few other changes to Friday The 13th: The Game for all players and not just the single player aspect. We will also be seeing counselor Victoria Sterling added in, a Jason Part 7 rebalance, new skins for Roy, upgraded Jason grabs, a Jason weapon selection option, PC key binding, AI improvements, and more. The more will probably be more minor things for Friday The 13th that will most likely be behind-the-scenes portions since they were not listed, but that is a good group of updates coming to the game. I hope it breathes even more life into the game before we go out there and snuff it all out.

Was this the big update for Friday The 13th: The Game you have been waiting for or have you been having fun with the multiplayer aspect since launch? Will this bring you back in so you can experience more of what the game had to offer? Will we ever get to see a solid single-player game in this setting and would you want to see one? Let us all know down in the comments what you are thinking and then feel free to discuss. As we have more for Friday The 13th: The Game, we will update you on the site. Just be sure to keep checking back in to see and experience it all.