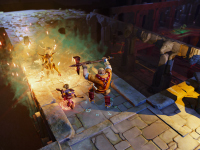 A new tactical RPG, Iron Danger, has been announced and Iron Danger looks to mix in some other interesting features into the genre that we have yet to see

Get ready for a new twist on the tactical RPG genre as we now have Iron Danger announced and coming that aims to give us a game like no other that we have experienced before. At least in the tactic RPG genre. Unless that claim from Action Squad Studios is aiming to go a bit larger than that when all is said and done. I do not think that is the case for Iron Danger here, but it could be something I am missing. We will just go for this game for now and take a deeper look at what has been announced and for us to look forward to in the coming months for the PS4, Xbox One, and PC. It could be coming years to as we are only getting to see pre-alpha footage of the game, but that does not roll off the fingers as smoothly.

What we do have here for Iron Danger is a new tactical RPG that also looks to bring in some time-bending mechanics for the game. It looks a lot like the mechanics we saw in Sand Of Time where we will have the ability to rewind time and have a bit of a do-over if we die or things do not play out the right way. How far back we can go does not seem to be completely defined as of yet, but it is in there. You can see it in the following trailer for Iron Danger where it looks to range from a second or two up to quite a few seconds. Also not just limited to a death condition as there are other events that look to get the rewind treatment in the game. All so we can better save the world with our team of unsung heroes we are pairing up with.

Finnish developer Action Squad Studios announces their new game, Iron Danger, with release of the pre-alpha gameplay trailer. Iron Danger is a genre-blending tactical RPG with simultaneous turns and time rewinding mechanics, providing a uniquely experimental take on combat and puzzles. It is also a game that focuses heavily on story and aims to minimize grinding as a part of the character progress.

The world of Iron Danger draws its inspiration from Nordic mythos, and especially from Kalevala and Finnish folklore. It tells a story of Kipuna, a simple village girl, who becomes imbued with a cosmic power that grants dominion over time and death. The group of unsung heroes, led by Kipuna, must use their wits and power over the time as they’re drawn into the midst of a war between the city of Kalevala, ruled by an immortal, who has renounced the gods, and the armies of the Northlanders driven by their Witch Queen.

What do you think about Iron Danger and what we have so far for the game? Does it look like another great Diablo-like title with some elements changed and the ability to go back in time or does it remind you of some other titles out there? Do you think there will be a specific limit on this mechanic or will it be only for deaths and specific events in the game? Let us and the world know what you are thinking about the game down in the comments and discuss as you wish. For more on Iron Danger, be sure to keep checking in on the site here to see and hear everything that we can scrounge up for the game. Hopefully, we will not let you down.