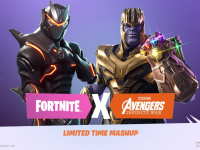 A new limited time event for Fortnite has kicked off here and this one ties in some of the great fun that Epic Games has for us with the latest blockbuster title that Marvel has put out in the MCU, Avengers: Infinity War. Why would they not try to bank on the success and give gamers a little extra, right? Well they have and in this latest update and event for Fortnite we get to take on Thanos as well as be him. That is provided that you are able to find and wield the Infinity Gauntlet in the game. That is all up to you though and not something that you have to randomly hope for though…

All of that said, if you want to have your chance at being the Mad Titan in Fortnite all you have to do is hop into a solo match and look for a meteor that will crash down in the storm safe zone early in the match. Once that happens all you have to do is be the first to the Infinity Gauntlet that will be on the ground where the meteor crashed and you will be transformed into Thanos. Not only that, but you will also be given a lot of his super powers and abilities from the Infinity Gems in said gauntlet. That does not sound like too hard of a task. At least for those who are either fast or lucky when it comes to Fortnite here.

For the players who do not make it to the gauntlet first in the match, there is something in store for you. First, all loot that will drop will be of Rare or better quality to help you take down the Mad Titan in Fortnite. Second, if the player of Thanos is brought down before the end of the match, any player can pick up the Infinity Gauntlet where it lays and put it on to become Thanos themselves. So there is really a few different ways that you can do this now. Not too shabby for a fun little limited time event for Fortnite. Although it would be nice to know when it would end so players can plan accordingly. Just know that it is on as of you reading this.

What are your thoughts on Thanos coming to Fortnite in the way that he is? Do you like this little mashup or will it be for the more experienced players to have extra fun at your expense? Should there be a way for those unlucky or unskilled to be able to play as the Mad Titan during the event or should they all just start up and hope for the best? Let us all know down in the comments and then feel free to discuss. As there are more updates to Fortnite, we will have them here. Just keep checking back in on the site to see and hear all of them in the not too distant future.