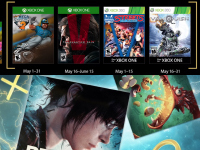 A new month is almost on us here with May and that means new video games that we are going to get for free. Well, video games that you will get for free if you are part of the PlayStation Plus or Xbox Gold services. If you are then you may be in for a treat as the list of titles going live starting next month is here and we have it for you. Again, we get to expand out titles on the Xbox One and PS4 without needing to make any extra spends at our local stores.

Given the proximity to Detroit: Become Human releasing and the fact that you can get Heavy Rain with that title, it makes sense that we will be able to round out all of the acclaimed video games from the developer with Beyond: Two Souls. A nice and solid title that I am interested to pick back up again. That is also not to shake a finger at the Xbox video games with The Phantom Pain being added into the mix. I am going to guess it will be something that will sate fans of the Metal Gear franchise whilst not being Metal Gear Survive. Another great distraction if one is needed during this coming month if you need one from all of the other major new titles being released.

Here is the list of games we will all get for our PlayStation systems starting on May 1st of 2018.

PlayStation Plus May Games

Here is the list of games we will all get for our Xbox systems starting on May 1st of 2018.