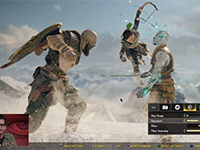 It was no big secret that God Of War was going to be getting a Photo Mode and that it will be coming at us some time after launch. It is all the rage as of late for PS4 games and Santa Monica Studios knew this was going to need to be something from the start. In a game as epic as God Of War, you know there are going to be a whole lot of shots that we will want to capture and share out there. More so than just the basic Share option that the system normally gives us all. That all said, last night during the big launch stream for the game, we had our first look at the mode and just how many new and interesting twists it will bring to us.

On the surface this Photo Mode looks to work about the same as always and just a new option for God Of War. The twists as it would seem is the fact that we are going to have a few extra options than any mode before and some will let us change the look and expressions of the characters. In the case of God Of War, we will have some happier and goofier looks we can place on Atreus and Kratos in the scenes. Want to give Kratos a big smile while doing what he does best? You can do just that. It looks like you can even have him give an eye roll if you so wish and many other facial expressions. Kind of a neat little feature to bring in for the mode here.

There is no word on when this will be added into God Of War yet; just know it is coming post-launch. You can see more of what we are talking about here just below in the video showcase. Then get out there and pick up God Of War now and get ready for the mode to be added in at a later time.

What do you think of the Photo Mode coming to God Of War here? Do you think it will force us all to want to keep replying the game or will it come in a bit too late for you? How do you feel about the extra facial expressions we can place on Kratos and Atreus here? Let us all know what you are thinking down in the comments and then feel free to discuss. If there is more for God Of War, we will have it all here. Just keep checking back in to stay as up to date as possible.