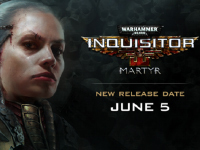 Delays have hit Warhammer 40,000: Inquisitor — Martyr to make sure that the title is able to bring all of the Warhammer fun to all platforms at the same time

May 11th will no longer be a day that you can expect to see Warhammer 40,000: Inquisitor — Martyr hit the PS4, Xbox One, or PC as the game has now been delayed. Sadly it looks like the team over at Neocore Games ran into an issue with getting all versions of the game up to snuff, with the consoles falling behind, and now we have to wait until June 5th for the game. Just a bit longer than proposed, but we will at least still be getting this Diablo-like title set in the Warhammer 40K universe still. It would have made no sense if it were canceled instead of just delayed.

Exact reasons for the console delay here for Warhammer 40K: Inquisitor — Martyr have not been given, but the team has been quoted as stating they will use the extra time to "crunch" in 90+ hours a week to make sure they do not miss the mark again. At least for the console side of things. For the PC version of the game, they look to take the time to "add extra polish" to everything to make sure it is up to snuff and possibly better by then. I never really bought into that whole "extra polish" shit before, but we will have to see if it is something that is truly going to be coming our way. I see it as the excuse to give more time for the console side of it at the end of the day though. Hopefully, they prove me wrong. Neocore and Bigben, along with Maximum Games, today announce a delay in the release of Warhammer 40,000: Inquisitor — Martyr, previously planned for May 11th. In order to offer players the most seamless gaming experience possible, the game will be released simultaneously on Xbox One, PlayStation 4 and PC on June 5th.

In Warhammer 40,000: Inquisitor — Martyr, players control an Inquisitor in the Caligari Sector, a region infested with heretics, mutants, and Chaos Daemons. The game, playable in both solo and online cooperative mode with up to 4 players, lets players progress through a persistent universe via numerous missions with varied objectives. The player embodies one of three classes with complementary abilities, each one offering specific skills and varied customizable options. They'll fight across destructible environments which use a cover system that is unique in this type of game, and must survive battles that are both tactical and brutal.

W40K Inquisitor — Martyr is going to be an innovative Action-RPG developed by NeocoreGames.

What are your thoughts on the delay of Warhammer 40,000: Inquisitor — Martyr? Do you think that the team will actually be able to put in all of the extra time they mention or will it be something to appease us until the new date comes? Do you ever see any of that "extra polish" on your games when they are delayed for that reason or is it just a cliché we have to hear each time? Let us all know down in the comments and discuss. If there are updates for Warhammer 40,000: Inquisitor — Martyr, we will have them here. Just keep coming back for all of those updates as they may come.