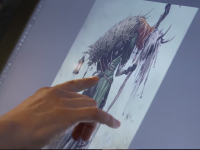 The hype train keeps rolling on for God Of War as we are only a few days out from launch (4/20/18) now and we still have more to see for the game. Even after all of the rave reviews, it has received so far, Santa Monica Studio still wants you to see why you should be excited to get into the game. This time around it is another good look at some of the upper-level monsters Kratos and Atreus will be facing off against in God Of War. The trolls are here yet again, but now we have a bit more than we have had on the mystical revenants we have only slightly seen before now. I am also sure that this is only the tip of it all and we will have many more to face off against when we spin the game up on our PS4.

First up we have a look at those revenants in God Of War. Although they should really be called poison witches based on what we have here to see and what the team says about them. That was the design choice they took for the creatures and what happens in the game to slightly signal they are in the area. To deal with them we are going to need to have Atreus aid more than with any other creature in the game as it looks too as they use magic to dodge and move out of the way of Kratos' ax. Not that they will stand still for Atreus to shoot either, but using the two characters to bring them down looks to be key here. Have a look at the revenant in action and how they will act in God Of War just below.

God Of War — Bestiary: The Revenant

The Revenant is just one of the creatures Kratos will encounter on his journey through the new God Of War. Learn how the team designed this enemy in our behind-the-scenes look at God Of War’s bestiary.

Next up we have a look at the trolls of God Of War yet again. Not much new in the way of details that we have not heard about already for the game. What is interesting is the fact that they are being labeled as the more intelligent of the monsters that the duo will be facing off with. This also includes having a religion they follow that is linked to the massive totems they are swinging at Kratos in all of the gameplay we have seen to date. It looks like we are going to be finishing the job the gods started in God Of War by making this race extinct in the game. At least that is how it all looks and maybe it will play out a bit different once we get to experience it all in game.

God Of War — Bestiary: The Troll

The Troll is just one of the creatures Kratos will encounter on his journey through the new God Of War. Learn how the team designed this enemy in our behind-the-scenes look at God Of War’s bestiary.

What do you think about these two creature types of God Of War now that we have a bit more to see for them? Do you think that we will need to drive all trolls extinct or will there be something else going on in the game where we will not need to do that? Do you think that the revenants will be more of the annoying type of enemies or will they add in some fun extra tactics we will need to worry about? Let us all know down in the comments and then discuss. For more on God Of War in all ways, be sure to keep coming back here to see it all. It looks like we may have a lot more leading up to launch and we will do what we can to get it to you.