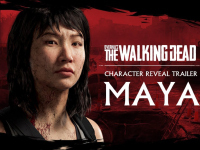 It is time to add another character to Overkill’s The Walking Dead and here we go with Maya. Just like the last character that we were shown from Overkill, it is all done through a very cinematic manner and not through any real gameplay to look at. Not that I am going to complain as this one certainly embodies The Walking Dead universe with another tragic survival story told without any words but actions. More or less, the backstory of Maya that we can look to experience when we get to finally play the game on the PS4, Xbox One, and PC this Fall. At least if they are able to get it out there and meet the standards of Starbreeze before the end of the year.

While there is not much to glean from Maya's trailer here, I think it will be safe to assume that she will have a medic role in Overkill’s The Walking Dead. The trailer shows that she was an ER doctor or nurse who happened to survive a lot similar to how Rick and Negan did in the comics. Maybe a little more violent than they had to go through, but she was caught at work and barely made it through the initial outbreak. All leading to a tragic ending that you can see for yourself down below. It is very fitting for the world of The Walking Dead and I hope it all plays some larger role in the final game and not just as backstory to never be brought up again.

Today, we’re introducing you to Maya. Everyone’s journey into the apocalypse is a difficult one and Maya’s is no different. Get your first peek at this new character now and get ready to play her story for yourself later this year!

What are your thoughts on Maya here in Overkill’s The Walking Dead? DO you think that she will be placed in a medic role in the game or will this just be a backstory thing that does not come into any kind of gameplay? Do you think this will be the same hospital that all of the other characters in the comics have been coming out of or will it be elsewhere in the world to better bring Maya into play? Let us have all of those thoughts and ideas down in the comments and then feel free to discuss. For more on anything The Walking Dead, keep checking back here on the site to keep up to date and keep the excitement flowing. That is unless you hate yourself.