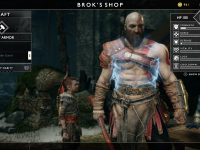 When the pre-order options for God Of War started to pop up we all had our first look at how we may be able to customize Kratos in the new game hitting us on April 20th. At first, it all looked cosmetic and a nice little extra to change up Kratos' look as Santa Monica Studio has done in past titles. Then it was revealed that there was going to be more than just a little bit of style and look with this "gear system" in God Of War and that there would be some kind of change outside of just cosmetic. How much of a change? Well, we will not know completely until we get to play the game on the PS4, but we do have a bit more insight on just what we will get to do with this customization.

In the latest developer diary for God Of War we now get to see a few more options, not many more, but it does look like we will be altering Kratos' and Atreus' stats a bit. Now not only can we make them look as we wish but also change up how they play to fit our own play style. The specific stats are not detailed as of yet, but the team goes into how we can focus all on strength to hit harder but it could lead to us being killed faster. So another aspect we need to focus on and plan further out when we head into combat. That is if we cannot change things on the fly or if we need to head back to our dwarven friends each time we wish to make a change. I have a feeling that will be the case. I hope not though.

Have a look at how this will all work in God Of War just below. At least as much as the team is willing to give us for now. I know there will be a lot more mixed in as they have held back on a lot of details so we all find out as we play. April 20th is not much further off now.

God Of War — Fight Your Way

God Of War features a robust progression system allowing you to customize Kratos and Atreus’ abilities and armor, and fight through the game your way.

How do you feel about having the ability to change Kratos and Atreus as we see here? Were you hoping it was going to be just all cosmetic or are you glad that there will be some links to the gameplay? Do you think this will lead to some of those whacky and fun costumes as we had before or will we keep with this game's more serious tone? Let us know your thoughts down in the comments and then feel free to discuss. For more God Of War, just keep checking in here. We will keep all of these updates coming at you and you will be glad you caught every one of them.