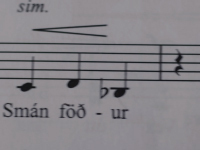 One of the things that God Of War has always been known for, outside of the insane violence to the Gods, has been the score and music that accompanies the game. It sets the mood in many cases or emphasizes what Santa Monica Studio was going for in the scene. Think back to any version of the God Of War franchise and I think you will be hard-pressed to find a scene that did not have some level of music with it to set the mood. It is how the franchise has been as long as it could. It is also something that helped ground the level of storytelling that could come with the game in my opinion. Music is one of those forces that can tell an underlying story without words.

This is why it is no surprise that the new God Of War is going to be using the same thing to help tell the story and set the mood. Just in a slightly different way, though as it looks like the chants and vocal parts of the songs have a hidden meaning to them as well. At least if you can speak Old Norse. As you can see in the following video, the team took to recreating the similar feel from the past God Of War titles but make sure it fits perfectly in the new world. It just catches my eye, or ear, that the team wrote the vocal parts in English and then had them translated so the Icelandic performers could deliver them in Old Norse. Maybe there is a bit more to it all than we thought…

God Of War — The DNA Of The New Score

Big strings, big brass and a choir singing old Norse. Lead Music Producer, Peter Scaturro, takes us into the melodic world of Iceland, and the musical inspirations that led to the new score for God Of War.

If I had to guess, there is no true deeper meaning to the words in the songs for God Of War. If anything, they could be Easter Eggs mixed in for fans and linguists to uncover along the way. We have had that already for the runes we see in the game. I just have a doubt that Santa Monica Studio went as far as, say, Iron Man did where the true words spoken in other languages divulged the story and plot of the film to those who actually spoke it. That would be a cool little Easter Egg to find, but given that the team has been so secretive for this God Of War so far, I would guess they would not out the whole story in this way. That is just my thought though.

What are you now thinking about the score and music of God Of War after all of this? Do you think it will add the same level of detail and deeper meaning to scenes in the game or will it go by unnoticed as we crush everything else in the game? Do you think that there could be hidden gems in the spoken words here or is it most likely just some basic things being stated in English and translated into Old Norse? Let us all know what you are thinking and, of course, feel free to discuss down below. As we get more for God Of War, we will add it all to the site for you. Just be sure to keep checking back in to be able to see and hear it all.