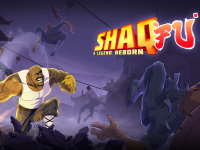 The release date for Shaq-Fu: A Legend Reborn has been set and we have a bit more of the story for Shaq-Fu to go right along with all that

If you have been biting your nails to find out when Shaq-Fu: A Legend Reborn is finally going to come home to your PS4, Xbox One, PC, or Switch, then it is time to stop biting and go get some help. The date has been set so you can figure out when to come back and pick the game Saber Interactive is shipping us. That date being June 5th now which makes Shaq-Fu: A Legend Reborn miss its Spring of 2018 timeline from before. Argue all you want, but June is not Spring. At least not to me. In the end, we can just be "happy" the game is actually coming to us in some kind of timely manner.

Going right along with the release date announcement for Shaq-Fu: A Legend Reborn, we have a new trailer showing off a bit more gameplay and what the game's story will be revolving around. It is as ridiculous as you may think it may be, but it is a game about a weird alter ego of a sports actor out there so I guess it is not too out there. At least that part will kick in a bit as if you picked up NBA Playgrounds on the Switch you will be able to get Shaq-Fu: A Legend Reborn for free. Maybe it will be worth the price of entry on the Switch at that point…

Shaq-Fu: A Legend Reborn will launch worldwide for PlayStation 4, Xbox One, Switch, and PC on June 5, publisher Wired Productions announced.

The digital edition will be available for $19.99. A physical edition with unannounced downloadable content will also be available at major retailers for $29.99 on PlayStation 4 and Xbox One, and $39.99 on Switch.

Users who purchased NBA Playgrounds for Switch prior to June 10, 2017 will receive a free digital copy of Shaq-Fu: A Legend Reborn on Switch upon release.

Indiegogo users who backed funding of Shaq-Fu: A Legend Reborn will receive specifics regarding the timing and deliver of backer rewards in the future directly via the game’s Indiegogo page.

Is Shaq-Fu: A Legend Reborn the big game you have been waiting for to come out in June or will it most likely be picked up at a later date? Are you curious on the same price increase between the versions of the game here or do you truly think that the physical versions of the game justify the increased prices? Will you be getting it for free on the Switch or will this make you a little more interested in NBA Playgrounds know it brings this one for free? Let us know what you are thinking down in the comments and then discuss. If there is more for Shaq-Fu: A Legend Reborn before launch, we will have it here. Just be sure to keep checking back in.