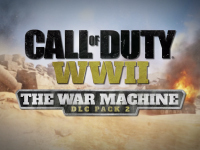 A new trailer for Call Of Duty: WWII’s next batch of DLC is here to entice us more into the world this Call Of Duty has built us

Last week we had our first taste of the next bit of DLC coming to Call Of Duty: WWII on April 10th. At least for those playing on the PS4 as they get it first. Just reminding you just in case you were expecting it on the Xbox One and PC on the same day. Nonetheless, we had our first taste of the three new maps, new War Mode mission, and the next chapter of Nazi Zombies that Sledgehammer Games has for us. Not much can be told or shown in screenshots, so to help with all of that we have a new trailer showcasing all of that in Call Of Duty: WWII and then some. Well, more just more of the same and nothing that has yet to be announced but those words felt "right" to use. Deal with it.

As you will see below, we are off to the new maps of Dunkirk, V2, and Egypt in Call Of Duty: WWII. You can see how those maps will handle and be experienced while running around trying not to get shot. That is at least how I experience them. Then we also get a few little tastes of Operation Husky and The Shadowed Throne. Truly not too much to go on for any of it, but it is some actual gameplay to look at here for the Call Of Duty DLC even if it looks like the same old stuff from before. I am sure that eagle-eyed fans will see the new bits in there, but without running the maps on my own, it looks the same. Or I am becoming jaded to this style of game and the franchise needs to mix things up for the better. That would require fans to not "harsh" on them when they do it, but that would be a perfect world.

Tensions escalate in DLC Pack 2 for Call Of Duty: WWII — The War Machine. Join the Allies and stop the powerful Axis advance in three new Multiplayer maps that illustrate the might and global reach of the Axis War Machine. Strike back and take part in the Allied invasion of Sicily in Operation Husky, the all-new objective-based War Mode mission. Plus, experience the latest Nazi Zombies chapter: The Shadowed Throne.

Now that you have seen the maps semi-in action for Call Of Duty: WWII, what do you think? Will they add enough to keep players coming back until the next DLC drop or will it just be something that the few still playing will experience for now? Do you think that all of the DLC should be bundled closer to grab more of the audience or does spreading it out equally until the next game's launch work the best? Let us know what you are thinking down in the comments and then discuss. We will keep bringing you more for Call Of Duty as it all comes. Just keep an eye on the site for all of those updates so you do not miss out on a single thing.