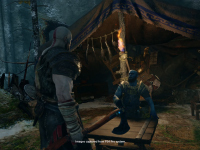 If you have not seen enough of God Of War’s new weapon and combat style, then get ready for a bit more. It is going to be driven home insanely well before the game hits the PS4 on April 20th. At least if these videos that Santa Monica Studio keeps putting out there for the game have anything to say about it. That is the bigger chunk of what we have here again for God Of War, as you most likely guessed by now, but it also does look like there were a few things we had yet to be told mixed in this time. It is another small reveal mixed into all of the larger pieces. Almost like they want to keep more hidden for us to find when we actually play the game and such…

As you will see just below, we have a new look at how the Leviathan will be upgraded in God Of War. I am not talking about the two dwarves we have seen many times already, but it looks like each part of the ax is customizable in some way. From the ax head to the hilt to the runes we can place on it. Each can be changed and upgraded from the sounds of it and this will change how the weapons and specials will work in the rest of God Of War. As it is described, this will be how the L1 and R1 specials from before will be mixed into the game and not through some other means. It also sounds like this will eliminate the need for other weapons along the way as well. I am hoping not, but we will see.

A new camera angle, a new mythology… and a new weapon. Learn how Sony Santa Monica built the Leviathan axe for the new God Of War, and designed it with customization and gameplay flexibility in mind.

Now that you have had a chance to see how it was all put together in God Of War and how we will change it, we have yet another bit of gameplay to look at that shows the Leviathan in action. Now that we have a bit more of the context from the crafting and upgrading we will get to experience, it all plays out a little differently to me. Seeing as not all of these may be moves and attacks we can use at any time we wish in God Of War, it does make it all even more tactical than just button mashing. I am sure I am sitting on the edge as Santa Monica Studio is except mine is to see if it will play well and theirs is to see if we like it enough to praise the game. Have a look though and see if your thoughts are changed too.

Lastly, and so we do not have to keep updating with multiple smaller God Of War posts, we have what sounds to be the final page of "The Lost Pages" here now. These are the short backstory fillers we have had for a while now that seem to be building up to the core story of why Kratos and Atreus are doing what they are doing. This one, in particular, seems to be setting up the core reasons at that as it does point to reasons why we need to be doing what God Of War has always been known for; killing gods and beast. If I had to make a guess here, I think we are going to be the "hand" of Freya in her fight with Odin. The story we have here does sound like Freya needs a champion, has reason to set the angry Spartan on a path, and also can link into Atreus through the magic. At this point, I would not be surprised if Freya was the mother we have heard of and seen a few times in the past and this is just how the powder keg of Kratos is set off.

I could be extremely off base for it all, but that is my current guess as to the overall story for God Of War now. Have a listen for yourself and see if your thoughts are aligning the same way as mine did. I have a feeling they may…

God Of War — The Lost Pages: The First Great War

Heed the tale of how it all started. Tensions between the Aesir and Vanir had been simmering for centuries when Odin tried to conquer Vanaheim. But he underestimated the strength of the Vanir gods, leaving the two sides stuck in a stalemate. Will Mimir be able to broker a compromise, or are the realms destined to remain mired in conflict?

What do you think about how we will be upgrading the Leviathan in God Of War? Do you think that we will be able to keep all upgrades turned on at all times or will we be limited and need to have them changed out throughout the game to fit our needs and style? Do you think I am on point with how the story is going to kick off in the game or is this all still marketing information to build more hype for the game? Let everyone out there know what is on your mind down in the comments and then discuss. We will certainly have more for God Of War in the coming weeks and when we do, we will have it all up on the site. Be sure to keep checking back in to keep as up to date as we are.