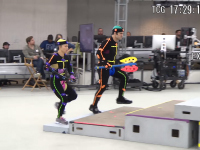 More from behind the scenes of God Of War is here as we have yet another motion capture video showing off how the team is making the game as life-like as possible. No, it does not look like Santa Monica Studios is doing anything that has not been done before in modern video games, but we at least get to see how some of the big attacks and combos we will be performing ad nauseam were digitized. Weirdly, none of it looks to have been done at all by the actual actor for Kratos and Atreus in God Of War, but it does look like all of the rage and anger will carry over. At least based on what we do get to see here.

The other interesting part of all of this is that the stuntman who is bringing Kratos' prowess to life in God Of War was one that the team discovered in a way many starting out hope it happens; through YouTube. Eric Jacobus is the person performing all of Kratos' fighting moves and combos in God Of War and all of which came about with a YouTube audition of the stuntman making up moves and submitting them along. Granted, he was somewhat asked to do this so it is not the most "Cinderella" of stories, but it is nice to see that they did not just go with who is the normal "go to" people in the industry. They opted for a gamer who can do the job and also was having fun.

Have a look at all of that just below and then get ready to wait just a bit longer for God Of War to finally come to the PS4 on April 20th. No, they did not push out the date if you were worried somehow that was the case. I think there would be more angry gamers out there than this Kratos could handle if that were the actual case.

5-hit combo. Ax melee. Sparta kicks. Discover how mocap stuntman, Eric Jacobus, learned to fight and become Kratos, and how we discovered him.

Does this get you further ready for God Of War or were you hoping to see more of the actual game before launch? Do you think it was harder to use these stun people then match up to the base actors than it would have been to have them do their own stunts? Do you like the fact that Santa Monica Studio went with the stuntman that they did or should they have gone with a different person? Let us know down in the comments and then feel free to discuss. Each new tidbit for God Of War will be here on the site. Just keep checking back in here to see them all and get completely up to speed before launch.