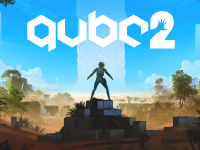 We sit down and review Q.U.B.E. 2. The puzzles and story continues as we try to make heads and tails of things. Here is our review of Q.U.B.E. 2

It is time to head back into the weirdness and puzzles with Q.U.B.E. 2. The sequel, obviously, to the last title that Toxic Games brought us that introduced us to some weird new puzzles to solve with the use of special cubes. Cubes that we bring to life with our special suit and granted through various other means. I know I particularly loved the first Q.U.B.E. and was excited to see where we could go with a sequel and all the fun of solving a whole mess of new puzzles for some reason or another. Most likely to escape something horrible but maybe, just maybe, something completely different. Here is our review of the most recent game.

You are Amelia Cross. An archaeologist who wakes up in some place she has no clue of after an event that is still fuzzy in her own head. She is wearing a fun suit with special gloves that let her manipulate other things and bring the titular cubes into existence. To help her along her path of understanding what and where she is, the voice in her ear Emma Sutcliffe is there to fill in the gaps and bring an end to everything that has gone wrong. Will they be able to make it to the end or will something else keep them from the final destination? That is why you have to play the game now. Given all of the time since the first game and Q.U.B.E. 2, I was expecting the game to be on the longer side and add in new elements that were not there before. There were some great things added in, but more or less the game is just about as long and has removed other mechanics and used them in a different way. This can work, but it felt like there should have been a whole other set of chapters mixed in that could have utilized the now missing fourth cube color. Yes, we are down to three specific cubes with the fourth getting used as a world object in places. The move here did not pay off for me as I could imagine so many other instances where it could have been used and made Q.U.B.E. 2 a bit longer.

Maybe that item was reworked to give way to the second issue I ran into with Q.U.B.E. 2. The story did not make sense at many locations or the information being passed just did not come over as well as I am guessing Toxic Games wanted it to. I will not post spoilers, but I truly needed to play the game twice to fully understand what was going on as the weird statue scenes did not convey much to me the first time around. They needed to be a better way to do this as even though there is a reason to replay for trophies and achievements, one should be able to get the basic story of Q.U.B.E. 2 in a single run and not need to go through the paces to get the basics. Maybe it was just me, but it was a struggle for me. Even with the removal of part of the mechanics from Q.U.B.E., the puzzles in Q.U.B.E. 2 were completely on point the whole time. The "tutorial" puzzles were enough to get you used to the new mechanics as you picked them up. The bridging puzzles were enough to give a challenge yet make you practice. Then the puzzles at the end of each chapter brought the real challenge and could cause some head-scratching at times. Never to the point of frustration, but enough to make it hard yet rewarding once you figured it out. It is a hard task to accomplish in a puzzle game and Toxic Games hit it right home here yet again. Even after solving some, they still posed a challenge to repeat. Not many games have done that.

As I mentioned before, there were some new elements added in for Q.U.B.E. 2 that replaces a few of the missing things. These included new doors that needed to be opened in specific ways and other ways to use the cubes we created. It truly added a whole new dimension to the game and puzzle solving that I truly enjoyed. Most of these were also used in more of the more challenging puzzles, which could have been why there was the challenge, but it all worked much better than expected. This also included the balls and magnetic or moving platforms that we needed to manipulate in sequence at times. The perfect way to add to Q.U.B.E. 2 while removing things that may not have worked before. If you are going into Q.U.B.E. 2 looking for a story or some deeper meaning, it is there but it will require some work. If you are looking for a fun and solid game that will give you some challenging puzzles then you need to pick up Q.U.B.E. 2 right now. It delivers on that so very well that I cannot wait for some form of expansion or just a whole new title for the IP. Sure, it was a bit or the short side but I loved every minute of it and that is a hard task for video games to do in today's market. Even if you are just looking for something to break the big budget and open-world games that are currently out there, Q.U.B.E. 2 will give you just that distraction and you should not be let down.

Q.U.B.E. 2 was developed and published by Toxic Games for the PS4, Xbox One, and PC on March 13th, 2018. A PS4 copy of the game was provided by the publisher for reviewing purposes.