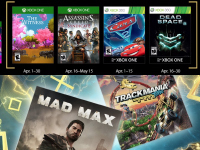 A new month is almost on us here with April and that means new video games that we are going to get for free. Well, video games that you will get for free if you are part of the PlayStation Plus or Xbox Gold services. If you are then you may be in for a treat as the list of titles going live starting next month is here and we have it for you. Again, we get to expand out titles on the Xbox One and PS4 without needing to make any extra spends at our local stores.

More video games and more solid titles in the mix there. Mad Max was a hidden gem for me, but given the proximity of all of the other open world games, it could be a hard sell to drop the time. Definitely pick it up though as it is worth the time once you have it. The Xbox, on the other hand, does have some of the better titles this month with Dead Space 2 and Assassin’s Creed Syndicate. Just like Mad Max though, all of this is going to come down to time as it is going to be in short order with everything coming out now and throughout April. Still a solid list of free video games nonetheless.

Here is the list of games we will all get for our PlayStation systems starting on April 3rd of 2018.

Here is the list of games we will all get for our Xbox systems starting on April 1st of 2018.