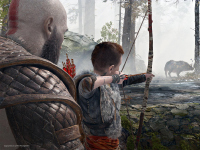 It is time to spin up that broken record again as we are back talking about Atreus in God Of War and how he will not be part of one large escort mission in the game but will add to the overall gameplay experience. So many times this has been driven home and focused on by Santa Monica Studio it is hard to think that no one out there knows this yet. Then again, it has only been by word and limited gameplay so far for God Of War. None of which made Atreus look like a burden on the gameplay side by adding to the overall story and difficulties Kratos will have to go through. Exactly what they have been aiming for; at least they have all claimed.

All that said, we have yet another behind the scenes video for God Of War that dives more into Atreus and how he will be in the game. There is no need to constantly be giving commands, but there are options to call him in when needed to shoot some arrows. At least this is based on the base gameplay we have seen from all of the early previews for the game. More or less, it looks like he will be just as useful as Ellie for The Last Of Us during the Joel scenes. That is how it sounds to me. I have huge doubts that we will get specific scenes in God Of War that will be exactly like her gameplay, but the way they are hitting it all home here, maybe we will have sections where we have to play as Atreus and not Kratos…

The evolving relationship between Kratos and Atreus is the backbone of God Of War’s narrative, but how does it fit in the moment-to-moment gameplay? Learn how the team at Santa Monica Studio designed Atreus to be a totally seamless companion, adding utility and moves that Kratos lacks, while never requiring micromanagement or complex commands.

Something that has started to stand out more for God Of War in terms of Atreus is the fact that magic seems to be all through the rune in the game's world. Something that Kratos cannot read or understand. Something that Atreus is needed for. If memory serves, I do not think I have seen the tradition magic used by Kratos in anything as of yet unless you want to consider what the ax does as magic. Could this be how that element of the game is brought in and we just have yet to see it in full? Possibly. That would require us to give commands to Atreus more than mentioned in the above video, but it could be as simple as just pressing a single button as before and thematically it is all just coming from Atreus.

All of this is just speculation based on memory and what we have seen for this God Of War so far. I could be way off on all of it, but it does seem to make a bit of sense to me. I guess we will all see when the game hits the PS4 on April 20th. Only a few weeks left now…

What say you on Atreus for God Of War and how he has been designed for the game? Does he sound like he will be more on par with Ellie or is that just the feeling based on the bits we have seen for the game to date? Do you think that all magic will be driven through Atreus or will it be left out for other reasons? Let us have all of those thoughts down in the comments and then feel free to discuss. It looks like there is a whole lot more for God Of War to come. As it does, we will have it all up on the site here. Just stick close by so you can see and experience it all.