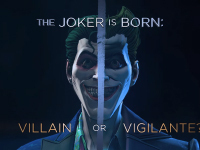 The ultimate culmination of our choices in Batman: The Enemy Within is coming to a head and we can now see just how this Batman villain may turn out different

It looks like Telltale Games is really pushing this birth of the Joker thing in Batman: The Enemy Within as we have two more trailers for the final episode here. One for what a villainous version of the Joker will look like. One with a look at how the Joker could be if he goes all vigilante on Gotham here. They seem like a massive deviation from each other and will be driven all by the choices we have made so far in Batman: The Enemy Within. All of this we should know by now. But do take note that I stated "seems like" when moving forward with all of this. I promise it comes back around.

If you are trying to stay as spoiler-free as possible for Batman: The Enemy Within's finale, then you may want to skip the trailers we have here. It may show you a bit more than you were hoping for. It also shows that, for the most part, both versions of the Joker are going to be about the same. At least that is how it looks to me. Sure, one is out there trying to help Batman and bring down the other villains, but he is doing it in a pretty villainous manner. Last I checked, stabbing someone in the neck multiple times was not a normal "heroic" thing. Granted, we could go down the anti-hero path and it would fit right in, but the choice of V-words here does not make it seem that is where they want us to go.

My guess is that no matter which version of the Joker you end up with in Batman: The Enemy Within, it will all still lead to the same ending. Most likely the Joker being the next "big bad" if the series continues on for a third season. You can already see hints of there being a struggle between Batman and the Joker if he walks the vigilante's path. This leads me to think he will still go full villain no matter what, we will just see it at a later date in the whole vigilante story path. That is if Telltale Games did not do the same thing they did in the second season of The Walking Dead and then will need to plan way ahead for the future.

Batman: The Enemy Within — Vigilante

The Joker is born in Telltale's Batman: The Enemy Within. Your choices will determine which story – and which version of The Joker – you’ll see in the season finale, out March 27, 2018.

Batman: The Enemy Within — Villain

Which version of the Joker are you excited to see in Batman: The Enemy Within? Do you think that the paths will diverge greatly or will it be enough to make it feel like we made the Joker and he will still end up the same way no matter what? Do you think we will see a third season of the game here or will this one bring it all to a close? Let us know down in the comments and then feel free to discuss as you wish. If there is more on Batman: The Enemy Within of the IP in general, we will update you on the site with it. All you need to do is keep checking back in to be able to stay as current as possible.