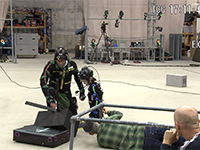 One of the ways that Santa Monica Studio is looking to bring more emotion to God Of War is by having no camera cuts along the way. It is definitely a great way to keep us all involved or at least feeling like we are involved as it does not break the immersion. It is a tough thing to do in films and TV and God Of War is giving it a try here on April 20th on the PS4. None of that is truly new to anyone who has been following along with the game's development. This is going to be a new take on the character and game with more emotion given the new setting.

All of that said, it has not been talked about much on just how God Of War will accomplish this, just that it would be done. That is, of course, until now as we have a new developer diary to look at to show just how it was all filmed and crafted behind the scenes. The also includes a look at just how it will transition from gameplay to cinematic too by showing off the E3 Demo where this happens as well. It definitely looks seamless here, but the truth will be in the final version of God Of War. I have no doubts it will go just as well as the team hopes. That could just be the super fan in me though.

Have a look at just how this feat was done in God Of War just below. Then get ready for the month of waiting until it finally comes to our homes. That will be the hardest part of all of this for me.

God Of War — In A Single Shot

Perfect movement; no cuts; no errors, not even a single load screen. Could be a legendary story. Dori Arazi, God Of War Director of Cinematography, opens the lens on achieving what was once thought impossible – never taking the players eyes away from the journey.

What is your thought on the single shot camera we will have here in God Of War and do you think it will pay off just as well as assumed? Do you think that positioning of the camera and player during scenes could cause this to break or will Santa Monica Studio have thought of all angles beforehand? Will this truly help evoke the emotions that the team is aiming for or will it go missed by gamers out there who just want to fight? Let us all know what you are thinking down in the comments and then feel free to discuss. For more on God Of War, be sure to stick close here. We will keep the updates flowing.