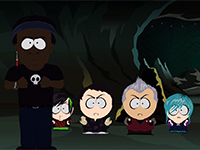 We have your first look at South Park: The Fractured But Whole’s new DLC that takes us into one of South Park’s other iconic locations

A whole new reason to dive back into South Park: The Fractured But Whole is here as the next DLC has been released. This would be the next major addition to the game that Ubisoft put together to take us all to Casa Bonita and take on the goth kids, vamp kids, and all kinds of other enemies. Some of whom we have already seen in South Park: The Fractured But Whole, but it does look like there is a lot more mixed in. Even the option to summon Satan. At least from what we can see from the most recent trailer for the DLC. Maybe it is all part of the new class that we have here or maybe just another nice addition to the overall title.

Have a look at the new trailer for South Park: The Fractured But Whole and the DLC. It is currently out for the PS4, Xbox One, and PC and has been since March 20th. This DLC can be picked up by itself if you so choose or downloaded as part of the Season Pass that you could have picked up back when the main game launched. It has been a long journey to get here and now we can experience all that South Park: The Fractured But Whole has to offer. Unless there is some more hidden DLC that will come at a later time.

South Park: The Fractured But Whole — From Dusk Till Casa Bonita

Mysterion's sister is in trouble. She's fallen in with the Vamp Kids of South Park, who have descended upon Cartman's favorite restaurant, Casa Bonita. Visit the famous family eatery and explore Black Bart's Cave, watch the cliff divers, taste the magic of Mexico and defeat the brood of Vampires.

Fight darkness with darkness and embrace the new Netherborn class, which features four new occult powers. Dress the part in new Goth costumes and gain some sweet loot. Enter the battle alongside Henrietta, the Goth: a powerful support Witch, and bring your new powers and buddy to the rest of your superhero adventure.

Is this the DLC for South Park: The Fractured But Whole you have been waiting for or have you moved on to other things out there? Do you think this will capture the real and fictional design of the location or just one aspect? Do you think that Ubisoft may have more DLC to come for the game or will this truly be it? Let us all know what you are thinking down in the comments and then feel free to discuss. If there is more on this South Park title or any more in the future, we will have it all here. Just keep checking back in to stay as up to date on it all as possible.