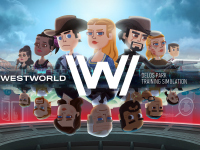 I knew it was only a matter of time before we had a video game based on the recent version of Westworld. While it may not be exactly what I was hoping for out of Behaviour and Warner Bros., it is a game and it will take us deeper into the franchise's world and lore from the comfort of our phones or tablets. Yes, this is a mobile Westworld for the iOS and Android platforms that we can get cozy with while we wait until the show starts back up. I think it may be more along the lines of between episodes as there is no release date as of yet, but pre-registering is available. The show comes back in a few weeks so I am certain it will be timed right along with it.

The premise of this Westworld game is that we are a new hire for Delos and are being put through the ropes of building the world and simulations. We will be hopping into the Delos Park Training Simulation to do all of this and make new narratives for the hosts and guests. All of which will be based on information right from the show as the producers and writers of the show are directly involved. How much of an overlap there will be has not been discussed, but there will be something. Even if it is just some of the characters and scenes we have grown to love so far. I know I am excited to give it all a go when it does finally launch.

Warner Bros. Interactive Entertainment today announced pre-registration for Westworld, the upcoming mobile game based upon HBO’s most-watched new original series. Produced by WB Games San Francisco in collaboration with Kilter Films, Westworld is developed by Behaviour Interactive and will be released in 2018 for iOS and Android devices.

The production and publishing teams at WB Games San Francisco are working closely with Westworld’s producers and writers to deliver a game featuring content designed to complement and augment the rich depth of the series. In the Westworld mobile game, players will assume the role of a newly hired Delos Trainee, who has been granted access to the Delos Park Training Simulation (DPTS). In full control of the simulation, players will take over all aspects of the Westworld park operations — including manufacturing and care-taking of artificially intelligent hosts and satisfying guest desires.

The above trailer did not do too much to show off the gameplay for Westworld. Thankfully, we have yet another trailer to look at that shows us just that. It looks like a mix of Fallout Shelter and a few other map-building titles already out there based on what we do have. There is no indication on how involved we can be with the "day to day" part of the game, but it does look to have all of the fun Westworld nods and things in there to play with. My hopes are even higher now after seeing that and pre-registering is already done. I had to make sure I picked up that little extra for doing all of that early after all.

Are you as excited as I am to be getting a Westworld mobile game here? Do you think that it will be directly linked to things in the show or will it just have some good references and characters to tie it all together? Do you think it will come right when the show starts back up or will it hit right before or shortly after to build or keep hype, respectfully? Let us all know down in the comments and then discuss. We will have more on this version of Westworld and to see it all you have to do is stick close to the site. I know I cannot wait to learn more.