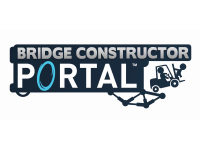 It can always be fun when we get mash-up video games out there that take two IPs and combine them into one and that is what Bridge Constructor Portal is here to do. The name here says it all as Headup Games aims to bring the game over to the PS4, Xbox One, and Switch for the first time to get us all into building bridges and then hoping for another Portal game to release. Staying on topic though, here we go with Bridge Constructor Portal as it has come out and is available for all. We had a chance to give it a go on the PS4. Without further delay, here is our review of how the game holds up.

You are the new guy at Aperture Science who has been tasked with getting other workers around the warehouse in the most cost-effective ways. Sometimes it is portals. Sometimes it is just plain bridges. Sometimes it is a combination of the two with other things mixed in to help or harm these workers. What does GLaDOS care if some of them do not make it home for the day? That is your job though, so do not let her or those workers down. The biggest gripe I have for Bridge Constructor Portal here has to be the fact that the base controls for setting bridges are hard to use when you need to get into a few of the finer details. Sometimes you need to build smaller bridges and by default come out as just basic supports and not drivable items. To make them an actual drive path, you have to hover over the item and make a simple click. Not too crazy or hard unless you have a whole lot of them around and the auto-snapping does not know to go to the direct item or the anchors. This drove me crazy when I just needed to make one small change to complete the path but could not because you just could not highlight over it. In many instances, I had to break down the whole structure I took time building just so I could make the change and then need to rebuild. Way too complicated for something that should have been straightforward.

Another thing that seemed odd to me in Bridge Constructor Portal that could have been fixed was the "Test" option we are given during construction. Any normal person would think that this would be how you could test the various aspects of the bridge before sending one of the forklifts over to their doom. You would be wrong to think that as all it does is test the structure and show you if it is going to fail based on the basic connections. This could be fixed with a bit of a UI tweak or just over time playing Bridge Constructor Portal, but the first few times I began to question why nothing was moving when I selected the "Test" option. Maybe it was just me though.

One last little bit that is more of a gripe and not much more, but what was the point of having a budget to build within Bridge Constructor Portal? During my time, I could not find a reason not to go all-out putting things everywhere and running the cost up. Even when I used three times the needed items on a puzzle, I was still rewarded with an Excellent ranking just because all of the forklifts made it safely over. Maybe I missed something but it seemed just to be there without any real game impact even though I thought there would be. One thing that Bridge Constructor Portal did well was capture the fun and charm of the Portal franchise. In many instances, it felt like being on the outside of a test chamber from any of the Portal titles and just helping a little bit as the "test subjects" went through. Add in the fun of GLaDOS being there to guide you as well as talk down to you, it brought me right back to that world even though I was in a totally different title. Headup Games completely named that and makes me truly want to replay all of the old titles yet again once I have masters all of these puzzles and chambers. Not to discount the core Bridge Constructor portion of the game though as that was well done as well.

Speaking to that, some of these puzzles crafted in this Bridge Constructor were extremely well thought out and planned. I was left scratching my head a few times trying to figure out how to make the perfect bridge or how to hit certain interactive items only to realize I was overthinking. Something that the game tries to remind you not to do. Sometimes the simple solution is the right answer, but given how things are laid out, you want to go crazy with everything. Never in a way that felt forced on the game's end but on my own after realizing I was making it all harder than it needed to be. It is rare that games can do that today and Bridge Constructor Portal hit it perfectly on the head and made keep striving to work better. That is a thing to say, right? Would I recommend Bridge Constructor Portal to you? If you are a fan of puzzles or physics-based puzzles, then you will have a lot of fun with this game as it definitely expands the IPs. Sure, there are a few minor issues that require you to learn how the game works and ignore how it really should work based on perception, but it is not a game breaker at all. You will get frustrated with it many times, but that is part of the fun of Bridge Constructor Portal. At the end of it all, you will feel very accomplished as you will want to do better each time and have the chance to do so.

Bridge Constructor Portal was developed and published by Headup Games for the PS4, Xbox One, and Switch on February 28th, 2018. A PS4 copy of the game was provided by the publisher for reviewing purposes.