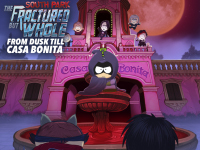 The next story DLC for South Park: The Fractured But Whole has now been set with a release date and will take us to another iconic location from South Park

We now have a release date to look forward to for the next DLC for South Park: The Fractured But Whole. It has been a bit of time since we last heard or saw much for the game, but we know that Ubisoft will be bringing the next story bit on March 20th. Yes, this will be the first major story DLC to come to South Park and it will take us to the iconic eatery of Casa Bonita. Some of you may have already known some of the content back when the Season Pass was detailed but now we know when we can add it to our game. Or at least look at it if you have not picked up the Season Pass and also do not want to pay $11.99 USD to add it in. It does come with another character class if that helps sway you.

In this new DLC, it looks like Mysterion's sister is in trouble and it is up to all of us to save here and liberate another location in South Park. The trouble is that she has fallen in with the Vamp Kids and they have taken over Casa Bonita. We will not be on our own though as we will also get to add in one of South Park's lovable Goth Kids, Henrietta, as a "support witch." What that specifically means is up to anyone to guess until March 20th, but she will be added into the mix of characters we can take with us to liberate the restaurant and save Mysterion's sister.

This DLC will also add in the class of Netherborn to South Park: The Fractured But Whole for us to embrace. It will have its own four new occult powers for us to use to our advantage. On top of that, we will also get to look the part as there will be some new Goth costumes added in for us to deck our hero in. Hopefully, the content of the story is more than that to justify the price point for the solo-purchase. Here is hoping for those who did not go all in for the Season Pass back when the game first launched.

Mysterion's sister is in trouble. She's fallen in with the Vamp Kids of South Park, who have descended upon Cartman's favorite restaurant, Casa Bonita. Visit the famous family eatery and explore Black Bart's Cave, watch the cliff divers, taste the magic of Mexico and defeat the brood of Vampires.

Fight darkness with darkness and embrace the new Netherborn class, which features four new occult powers. Dress the part in new Goth costumes and gain some sweet loot. Enter the battle alongside Henrietta, the Goth: a powerful support Witch, and bring your new powers and buddy to the rest of your superhero adventure.

Was this the DLC you were waiting for or will the next planned story DLC for South Park: The Fractured But Whole be what you were waiting for? How do you think the Netherborn will function and will it offer up something different than what we have seen with Kenny already? How do you think Henrietta will aid us in the fight or will she be a character we ignore for one of the others we are already familiar with? Let us have those thoughts down in the comments and then discuss. When there is more for South Park: The Fractured But Whole, we will have it here. Be sure to stick around so you get to see it all.