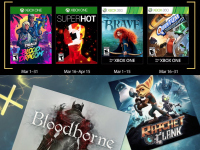 A new month is almost on us here with March and that means new video games that we are going to get for free. Well, video games that you will get for free if you are part of the PlayStation Plus or Xbox Gold services. If you are then you may be in for a treat as the list of titles going live starting next month is here and we have it for you. Again, we get to expand out titles on the Xbox One and PS4 without needing to make any extra spends at our local stores.

Another great batch of video games out there for next month if I do say so myself. Superhot is a blast, pun intended, and then you also have Bloodborne, Ratchet And Clank, and Mighty No. 9 mixed in. It looks like March will be filled with all kinds of gaming old and new as these are just the free ones that we will have in the mix of all of the other new titles coming out as well. I will not knock it at all, as they are all free-ish video games to have here. The backlog will not be happy, but I know I will be.

I know from looking at the lists here I would also say that PlayStation is hitting harder this month in general, but that looks like it could be to pad some of the other news that is coming for these free titles. Starting next year, March 2019, they will no longer be mixing in PS3 or PS Vita titles for the service. Only the two PS4 titles and the random other PS VR or exclusive video games that they do every now and then. The reason being that they want to focus more on the PS4, but given that I have not touched a single one of the free PS3 or PS Vita video games in the past year, I am going to venture that the change is due to a factor of many gamers doing just the same. Why waste money when they do not have to and can focus on making the service better?

Here is the list of games we will all get for our PlayStation systems starting on March 6th of 2018.

Here is the list of games we will all get for our Xbox systems starting on March 1st of 2018.