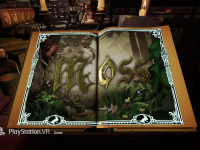 It looks like Polyarc has finally settled on a release date for Moss and now it has been set. Not too long ago we covered the game and there was still no set date other than February leaving a lot of people wondering when this PSVR title was actually going to come or if it would make the mark. For those who have not been following Moss here, I am talking about what we had to look at last week without a solid release date set still. All of that can be forgotten now as we can look to add the game onto our PS4 on February 27th now. Yes, that is next week for those who are following along.

Now that we know the when for Moss, I am going to guess that we have lost some of you now. For those still sticking around, we have a new trailer for the game to look at to see just how this platformer will look in general when we play it. I say in general as it is a VR title and while a platformer, it looks like the cut scenes for the game will still play out as we could expect for it all. Have a look at the latest trailer for Moss and then get ready to add the game to your library. It may seem weird for a VR title, but it has looked like it will add a lot of fun to the platform.

Moss is a virtual reality game that will have you guiding Quill, a brave little mouse heroine, through a tale of grand adventure by way of manipulating the environment through your motions. Quill is beckoned by magical forces to stop an impending evil, and only you can help her navigate treacherous paths, solve devious puzzles and fight fierce foes along the way.

The game has been built specifically for VR and is set to take full advantage of this exciting new medium for full immersion in its fantastical world. With plenty of VR games opting for the obvious first-person shooter genre, this action-adventure takes a bold direction and puts the player in the third-person perspective to act as support for the main protagonist Quill.

Are you glad to have a final date for Moss here or did you think that Polyarc was going to miss the mark with the February timeline? Does this look to be your kind of game for PSVR or will you be hoping to get to experience it without the additional hardware needed? Do you think that we could see a non-VR version of the game come at some point to broaden the audience or will it stick to the PSVR world as we know it? Let everyone out there know your thoughts on this and more down in the comments. If we get more on Moss, we will have it up on the site for you. Just be sure to keep checking back in to see it all.