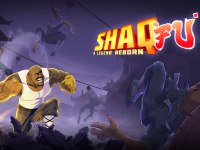 We can look forward to Shaq-Fu: A Legend Reborn to hit us this Spring as it takes on the horrible game from 1994 that spawned it, Shaq-Fu

It looks like some games franchises just never stay dead as now we can look to see Shaq-Fu: A Legend Reborn coming to the PS4, Xbox One, Switch, and PC this Spring. We are not talking about a remaster of the old 1994 title that was utter garbage during the time of everyone having a video game out there. We are talking about a sequel to that game from Big Deez Productions and Saber Interactive. There were a lot of gamers out there that wanted to see Shaq-Fu: A Legend Reborn come to light and now it is. I would not be surprised if a good portion of the Indiegogo funding came from Shaq directly, but nonetheless, it is coming and it looks to make up for that bomb from so long ago. That is a hefty task to do.

This is not the first we have heard of Shaq-Fu: A Legend Reborn, but as it looks like it is truly going to be a thing, we may as well get behind it for now. You can see the latest trailer for the game here and it does look like it could be a vast improvement from before, but still going through same scrolling brawler. Although I will say it does actually look like it could be a fun game to play. I do have a feeling that this version of Shaq-Fu is going to have a pretty lousy story mixed in. That is something that can be forgiven if the gameplay is actually as explosive as it is made to look in the following trailer. I guess we will find out here in the coming months though.

Shaq-Fu: A Legend Reborn will launch this Spring for the PlayStation 4 computer entertainment system, Xbox One, Windows PC and Nintendo Switch. In an all-new partnership, Saber Interactive has joined forces with independent publisher Wired Productions to give this cult-favorite a global digital and physical release.

Shaq-Fu: A Legend Reborn is an intense, action-packed beat ‘em up which sees players take on the role of the unstoppable Shaquille O’Neal as he fights his way through the hordes of hell and Hollywood. Master devastating combos, battle outlandish celebrity bosses and take on all comers with an array of weapons, including katanas, shuriken and baseball bats. Channel Shaq’s alter egos, Big Daddy O and Big Diesel, in epic battles in the successor to the worst game ever on a mission to restore Shaq’s legacy.

Is Shaq-Fu: A Legend Reborn a game that you were hoping to actually get made or are you still scratching your head as to why it is coming? Do you think it does look like a fun game to play or will it be just as much of a letdown as it was back in 1994? Do you think that Big Deez Productions is going to do some over-the-top things with the Hollywood enemies or will it be generic stereotypes to try to play it safe? Let us know what is on your mind for this and more down in the comments. If we learn more for Shaq-Fu: A Legend Reborn, we will have it on the site for you. Stick close so you are able to see it all as it comes.